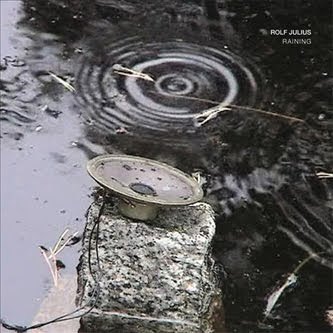 The title track on this disc, all 54 minutes of it, lies somewhere between assaultive and extraordinarily immersive and once again raises the question, why do I find this field recording "good" and that one not so much. For one thing, I take it for granted that this work by the late Julius is a carefully constructed one, using as its sources some large number of recordings, kneading and layering them, binding them together into this dense mesh that plops the listener smack in the middle of the most active natural environment imaginable, with water, insects, birds, creaking trees, rain and Gaia knows what else. That's its main effect as well, its sheer hyper-real, 3D presence. played at low volume, it can coast along quite nicely as such, being dipped into or ignored by the listener as (s(he chooses, but when amplified, the sounds encroach on one's sensibilities to the point of claustrophobic paranoia. Though very much state in its way, sounds do change over its lifespan, new ones introduced periodically, but the overall effect is one of stasis, of a rich, humid, teeming environment that grows but stays essentially the same. This contributes to the aforementioned assaultive character, in a sense, and some may find the ordeal a bit too much. I think it would have been excellent at about 30 minutes but does rather overstay its welcome, while admittedly retaining a strong aural image throughout.

The subsequent quarter hour cut, "Weitflächig" is kind of Raining-lite and not unwelcome at all, Julius' electronics (camouflaged fairly well on the opener) acquiring at least equal footing with the "natural" sounds. Very frothy, kind of like an active pond surface, water striders zipping about, mosquito larvae emerging, sun dappling, detergent foam lapping...The final few minutes, "Music for a Glimpse Inward", are gentler still, all bird chirps and soft electrics.