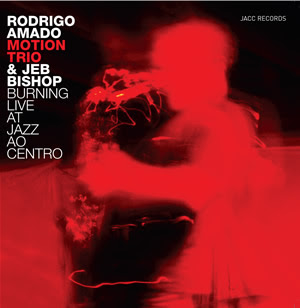 Clearly, I'm somewhat at a loss writing about no-nonsense jazz recordings like this one. Although I cut my teeth on just this sort of music, it's been quite some time since I've paid a great deal of attention to it so, at the very least, my frame of reference is 10-15 years old. With that caveat...

Amado is a Portuguese saxophonist, mostly tenor from what I can ascertain, joined by trio members Miguel Mira (cello) and Gabriel Ferrandini (drums) as well as, for this occasion trombonist Jeb Bishop. Amado's sound, to my ears, comes very much from Shepp and there's a similar rollicking, burly abandon in the three pieces presented here. "Burning Live" actually has some of the lilt of Rivers' "Fuchsia Swing Song", cascading along with nicely loose points of convergence along the way. "Imaginary Caverns" has more of a ballad structure, though things bubble and grow boisterous midway through. This is where I hear Shepp most clearly; Amado's tone is rich and burred and he's a more inventive player than the Vandermarks of this world. As I said, not my area of strong interest anymore, but had I been pulled along to a Vision Fest and witnessed this band, I wouldn't have been upset. Both Mira, in some drone playing and Ferrandini, in a nice toms and sticks solo, perform quite well on this track. The final cut, "Red Halo" returns to the raucous, though silvery smooth action of the first, Bishop especially churning . This one comes closest, for me, to capturing some of the magic that one might have heard from the aforementioned classic saxophonists in their prime. If, given my druthers, I'd rather listen, when things are said and done, to Shepp, Greenlee, Brown and Harris, well, that's my own choice and many others seriously disagree. For them, to the best of my knowledge, you'd be hard pressed to find a better contemporary example of that tradition than records like this one. 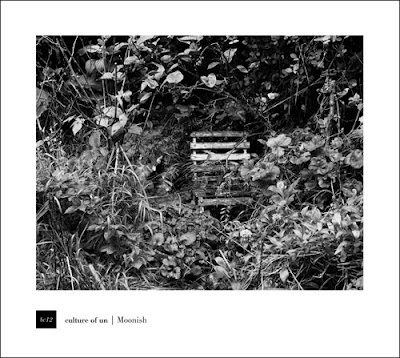 Wherein Chris Abraham (piano) and David Brown (prepared guitars, acoustic and "semi-acoustic") create music very much out of the Cagean tradition; the Cage of the 40s, that is. A fair question, in relation to the above write-up, might be, "Is this pair essentially doing, on the 20th-21st century avant-classical front, what musicians like Amado are doing in Jazz?" In this instance, I think the answer may be reasonably close to "Yes". As with the previous recording, the musicians are quite accomplished and pull off things with aplomb and a certain amount of creativity and excitement. Abraham's prepared piano (as set up here) conveys an even more direct reference to the sounds heard on Cage's "Sonatas and Interludes" than Amado's tenor does to Shepp and Rivers. More, though differently constructed than the earlier works (presumably at least partly improvised, though I sense some pre-ordained patterns) they're not a world apart from them. Given all this, is the music a good, interesting listen? Again, I'd say, "Yes." The interplay is always engaging, the sounds themselves captivating and varied, each instrument chiming with its own character. Abraham clearly has a melodic soul lurking beneath the abstraction and it serves him well. Brown also doesn't stray too far into aridity, alluding again more to Cage's piano music than Bailey or other improvising guitarists. There is a bit of sameness in approach over the span of the disc; I would have liked to have heard a couple quieter, more probing tracks perhaps. But as enjoyable to post-Cageans as the Amado will be to post-Coltranians.

You're obviously at a loss,and without a credible opinion...