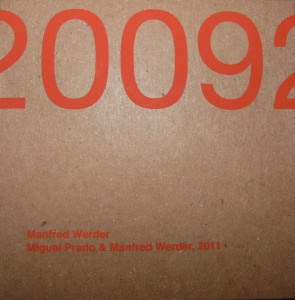 The spate of recordings of actualizations of Werder's works continues apace with this relatively unique one from Prado, though not so surprising an approach, given his questioning spirit. The beginning reminds me of Michael Haneke's "Cache", wherein one watches a "real" shot of a house exterior and road for several minutes before becoming aware that one is actually, within the context of the film's story, watching a videotape. This disc opens with urban sounds, not dissimilar, in general form, to those heard on other Werder realizations like Jason Kahn's recent month-spanning effort. After a few minutes, however, we hear Prado's voice saying, in accented English, "I wonder why everyone most people play Manfred's compositions with field [pronounced by Prado, "filed"] recordings. Well, this is a field recording too." Whereupon he presses a switch and the recording, which we had been listening to as "real", ceases and one hears the subtler sounds of the room in which it had been playing. The real world, as it were.

After a few minutes of digital silence, we again hear an environmental recording, sounding like a large interior with a certain amount of work transpiring. Within this, or over it--who knows?--we hear Prado speaking quietly, apparently reading, on the edge of comprehensibility. There follows a brief portion where French is spoken, more silence and finally Prado again, this time his voice very much foregrounded, once more apparently reading a text but in a tired, world-weary, almost whining tone.

Several reactions: the muffled voice portion was the most satisfying, for me, in aural terms but I'm forced to wonder whether, were that generally the case, Prado would consider it the least successful. More saliently, given the (proper) preoccupation of Prado and his ofttimes companions (Mattin, Chamy, etc.) with audience engagement and the antipathy toward passive reception, I wonder whether the inclusion of text subverts that notion or at least makes it far more problematic. With something like the recent Jason Kahn, whatever problems one might have had as to its reason for existing as a recording (rather than the listener going out and actuating it his or herself), one could at least allow it to float in one's own environment, to ignore it, to let it sink in to whatever else was occurring. Here, the voice compels one to pay attention, at least the first time or two through, to, out of "courtesy" attempt to understand the text. Interesting problem.

The score for "2009 2", incidentally consists of two quotations, the first from Alain Badiou: "ce qui « commence » n'est pas le 1 comme signe opaque de l' « unité », mais le zéro comme suture de toute langue à l'être de la situation dont elle est la langue" ("that which "begins" is not the 1 as opaque sign of "unity", but zero as suture of all language to the being of the situation of which it is the language") and one from Francis Ponge: "le pré, aussi, est une façon d'être" ("The field, too, is a way of being") 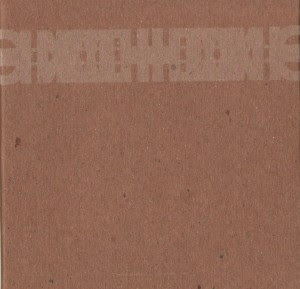 Fowler's (it says, "Flower" on the disc's spine, but I'll go out on a limb and assume that's a misprint) "Rhythmics" could, I imagine, be another Werder actualization, but it's not. His description, crossed through though it is, seems to indicate taking things at face value insofar as the recorded sources, all natural world sounds, heavy on the bees and other insects (mosquitos!). I take it that there's been a good deal of post-recording assemblage unless he recorded in extremely densely populated (by bugs) areas as the sheer thickness of the sound is sometimes overwhelming. To the extent one thinks of it as a composition, "Rhythmics does have a fine flow to it, surges as natural sounding as gusts of wind. It's never quite ignorable, too much detail packed in--not sure if that's a plus or not. But, hell, I liked it. Nice earthy feel; you can smell the grass, and feel the itch of bites.