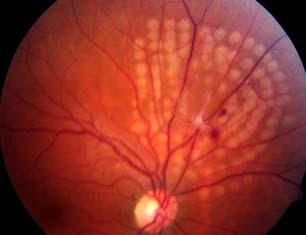 Once in a while, it pays off to be married to an Assistant Director of the OR at an Eye & Ear Hospital.

So, I'm at work, a little before 9AM. Yesterday, I'd had a slightly annoying floater put in an appearance in my right eye, a little larger than those that I'm sure we all get from time to time but nothing too bothersome, I was still there today but, again, I didn't pay it much mind.

Rather suddenly, it was as if someone had injected streams of black dye into the upper left side of my right eye. It flowed across making that half of the world resemble a monochrome Morris Louis painting. I kinda figured this wasn't good. So I did what anyone else would do, googled "floaters". Learned that what I was experiencing was not uncommon (the dark strands) and not necessarily a real problem but could be indicative or precedent to retinal damage. It dissipated over 15-20 minutes, leaving behind some stragglers and a fine mist of tiny particles that, I take it, were the remnants of the initial surge. So I called Linda who quickly scheduled me to see their best guy in this area.

Trundled down to 14th St, waited a couple of hours (the doc was doing clinic patients and couldn't, of course, bump them for an add-on), and eventually was examined. Lo and behold, I had a small retinal tear. "As retinal tears go," he said, "this is the kind you want to have." and suggested a laser surgery patch up. That afternoon.

So I did. Interesting procedure. I thought it might only involve a dozen or so zaps to seal the errant flap but it was more like 1,000. Very bright zaps. Very bright. Made for a rather psychedelic light show within my phosphenes. Some pressure/pain, but not worse than an average cavity filling. He explained that for people with extreme myopia, like yours truly, the tissue involved was stretched thinner than normal, making this kind of event more likely than in others. Something to look forward to, I guess.

Unhappily, I wasn't given a pirate eye patch to wear home and things seem to be operating as usual, though those floater remnants are still there and will, I imagine, take a few days to either disintegrate or settle.

Don't make me photoshop you into a pirate's outfit....

Glad you're OK though, I was worried at the start of reading your post then relieved at the end.

Also very pleased that "floater" has a different meaning in American English to proper English...;)

There's a dual meaning here as well, not sure if it's the same one.

To a full recovery, Brian. Unnerved at this occurring as you resume painting, but trust all will be well.

Thanks, Jesse. Floaters still abound as of this morning. Two kinds: a filament-like structure, like ink shot into an emulsion, though much less dense than the initial surge, and that fine mist of particles. The latter causes the vision in my right eye to have a slightly dimmer cast than it should. The fluid in the inner eye is so viscous that I'm guessing it might take a well for these things to "settle". But if you begin seeing watercolors with odd, darkish striations across the main image, you'll know why.

Late to this post, but hoping your mend is complete and any extant floaters banished. Good read in how you recounted the experience & one that reminded me that I need to check in on your musings here more often.