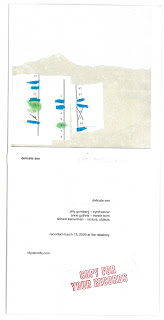 This is just a really good, varied and strong live set by the trio of Billy Gomberg (synthesizer), Anne Guthrie (french horn) and Richard Kamerman (motors, objects), recorded in March of this year. I think they have a leg up with the delicious instrumental blend here: Kamerman tends toward the harsh and metallic while Gomberg has a refreshing tendency, when I've heard him, to linger in tonal byways. Add to this the all too rare, in this music, timbre of the french horn, beautifully deployed here by Guthrie, and you have a delicious prospect from the get-go. And then they construct this utterly captivating performance that wends its way through numerous neighborhoods, each of interest, almost never flagging over its 40 minutes. There's a point about halfway through where Gomberg adopts an almost church-organ kind of sound opposite Kamerman's jangling metal that's fantastic and when Guthrie plants long, burred tones in the midst, transcendent. Fine work. [from chatting with Gomberg a few nights back, I learned that there was in fact a loose kind of system employed to structure the performance, not one, I daresay, that any at-home listener is likely to discern] 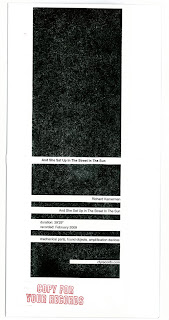 Kamerman's latest solo release is, not surprisingly, quite difficult to grasp in its entirety. It's very unwieldy in the sense of being almost impossible to have any idea what direction it's going to take though, those directions turn out to be generally both enticing and knotty. It begins fairly quietly, with hums, tumbled light metal, ratchety sounds for the first 15 or more minutes. Very attractive. Suddenly, there's a sequence of brutal, loud and "ugly" feedback-like tones that usher in a much more random and barren section, more open circuitry sounding with a fetchingly awkward sound placement. Kamerman, when I've seen him perform, often displays this attribute, which I enjoy very much. Similar to Annette Krebs, he manages to balance grace and imbalance, a tricky thing. Even so, he gets moving onto some wonderfully corroded terrain toward the back end of the set; it almost rocks. As said above, it's tough to put one's aural arms around the whole performance, but if you get over that (and why shouldn't you?) , it's a challenging, rewarding disc. 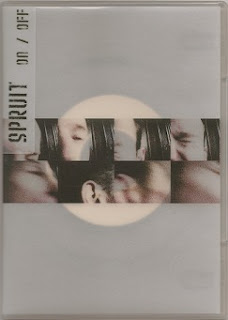 A 3" chock full with fairly harsh, loopy electronica that, overall, has the effect of being inside an old video game console, being buffeted around by every ping, explosion or chime. There's a prominent sound that reminds me of old, electronic scoreboards on pinball machines, a kind of brief, percussive throb, that's very alluring. I said "fairly harsh" but most of the music here has a feathery finish to it, enough that the aftertaste, if you will, is not unpleasant at all. Fun work, all 18 minutes; I imagine it would be quite giddily immersive live.

Thanks for the great reviews Brian! Here's hoping other people get into them as much as you did. :)