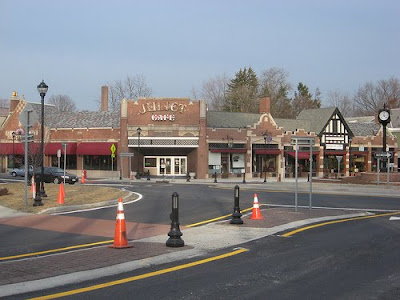 Been skimping here lately, but reviews to come soonish...

Meanwhile, some nostalgia. On Sunday, I drove to Poughkeepsie to return my brother Glen's wallet, which he had left at our place the evening before. Was considering overnighting it to him, but that was an iffy proposition, it was a beautiful day and I felt a bit like a drive, so I tooled up on Sunday morning and made the hand-off. I asked him for a decent place to get a sandwich and he mentioned this wrap place on Raymond Ave, so I went, ordered a roast beef wrap, a blondie and some iced tea and sat out on a bench that was situated right about where the above photo was snapped.

What's now the Juliet Cafe had been the Juliet Theatre in my youth, right across the street from the northwest corner of the Vassar College campus. A little up the road was the Raymond Avenue School, where I spent first, second and third grade*. A block away was the small record store wherein I first heard Fred Frith, Dudu Pukwana, Xenakis, Crumb, many more in the early 70s. I saw my first in-house movie at the Juliet in 1960, 'Spartacus'. Not a bad choice at all for a 6-year old! Although the other early one I recall viewing there was of a slightly lesser grade, Jack the Giant Killer. Saw many a movie at the Juliet over the years, including Ken Russell's 'The Devils' in '71.

Aside from different businesses inhabiting the storefronts, the street hasn't changed much at all architecturally. Traffic circles have recently replaced lights from this point south along the Vassar street front; sitting on the bench, I noticed there were apparently still locals who have little idea how to negotiate these obstacles. Called Carol, with whom I'm sure I attended a movie or two here while in high school, had a fine conversation. I'd just seen Betsy and Emily, two dear Vassar friends, the night before so the nostalgic convergence at this particular bench was wonderfully intense.

* My 3rd grade teacher was Mrs. Fratz, one of the two best instructors of my youth (the other, in 5th grade, was the beautifully named, hard smoking Sonia Brousalian). Mrs. Fratz (I remember "Mrs.", though I'm not sure) was overtly unattractive, looking very much like Max Patkin, the erstwhile Clown Prince of Baseball, with the added indignity of having severe elephantiasis in both lower legs. But what a teacher! Wonderful temperament combined with pushing this bunch of eight-year olds well beyond our supposed limits. I specifically recall learning 8th grade math, algebra, in her 3rd grade class. She retired during my senior year in High School, 1972, and apparently I wasn't the only one with fond appreciation for her toil, as our class gave her a nice retirement party. Thanks, Mrs. Fratz. Speaking of that gaggle of imps, if Martin Winn or Ronald May ever reads this, give a mail; always curious how you fared. 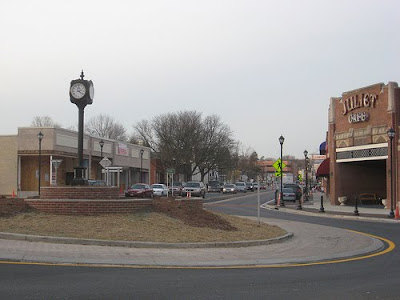