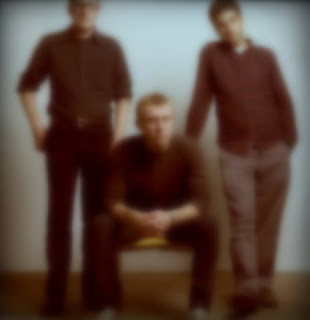 I like the text that accompanies this disc on the Entr'acte site:

A trebuchet is a medieval siege engine. Trebuchet is a humanist
sans-serif typeface. A trebuchet is an instrument of punishment
consisting of a chair in which offenders were ducked in water.
Trebuchet is the title given by Marcel Duchmap to the readymade
sculpture that he created by nailing a coat rack to the floor of his
apartment. Trebuchet is an endgame position in chess in which
whoever is the first to move will necessarily lose the game.

I also enjoy the music, as usual with Haptic and its eternal churning. Three cuts, two from July of this year, one from 2007 where Salvatore Dellaria joins Steven Hess, Joseph Clayton Mills and Adam Sonderberg. "Counterpoise" is a miniature of soft, organ-like tones with subtle thuds and minimal percussive patter, very enticing and sadistically ended at 3:16. For shame. "Three" varies most widely from previous Haptic material I've heard though it's not so far away--the texture is thinner than the normal porridge, the sounds more gaseous. The earlier track rather resembles previous Haptic work; more of the same, in a way, but their "same" is very good: deep rumbles, dense eddies, the implied throb, the punctured steam vents, the escaping magma. Oh, and the helicopters [or not--see below]. Although it's my favorite piece here, I might have rather heard something at this level of more recent vintage. Minor carp, though; another fine release from these fellows. 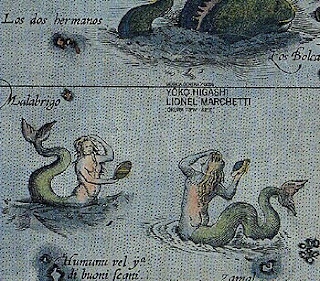 Three pieces, one each by Higashi and Marchetti, one combined effort. "Pétrole 73", by Marchetti, based on experiences he underwent onboard a trawler, lies atop a drone that pierces and wavers like a set of bagpipes (though I don't think that's the source), encircled by creaking hull wood, radio voices and softer, more overtly electronic tones. It's something of a tour de force and very impressive as such, boring its way into one's skull. Higashi's "Okura" is gentler though not overly so, incorporating the kind of elements more commonly found in concrete works, including music recorded in Mozambique (with a balafon-like instrument prominent), electronically distorted voices, chants, etc., eventually some funk. It has more of a travelogue feel and, as such, is quite engaging, not asking for much more than for the listener to sit back for the ride. The pair join forces for "Pétrole 42",the radio voices and creaks reappearing, this time over multi-tracked, held notes (Higashi?) that grow gauzier as the work progresses, sort of enticing but maybe a tad too woozy. Attractive recording overall, though.

Glad you heard helicopoters in the Haptic disc as well, thought I might have been imagining a little too hard...

Actually, no helicopter where use, or harmed, in the making of these recordings. Thanks for the review.

Thanks, Brian. By the way, its Entr’acte, not entr’acte...