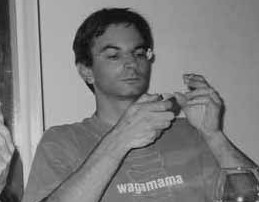 There's a tendency, among musicians in taomud (have I used that term here? The Area Of Music Under Discussion), one I think is generally healthy, in fact, to release music with little if any indication as to instrumentation or other descriptors of how the sounds were created. The disc package will usually have some sign of who's responsible (not always!) but perhaps only that. This may be partially in reaction to the jazz habit of listing every last device utilized in the recording which suplies its own kind of anal fun on things like old Art Ensemble records. To the extent this pushes the primacy of the music itself to the foreground, I'm totally in favor of this stratagem. If, as is my wont, I may make an analogy to painting, it's rather like being concerned with what materials were used to construct a work--is that watercolor or gouache? Was linseed or sunflower oil mixed with the paint? Who really cares? I mean, it's of some interest on a certain level but what you're seeing--or hearing--is usually a level or two above that.

Now, when you receive discs for review purposes, sometimes there's accompanying notes that go further in explicating the music that the info provided on the disc sleeve itself. Fine, if it's put out there one way or another, it should be used. But if it's not, if the disc arrives without notes anywhere, I assume that's the desire of the artist and try to respect it accordingly. Sometimes, I may have conceptual questions--is this what you were shooting for?-- and may inquire of the musician. Often, even when I do, the musician would rather I sort that out for myself; all well and good. Sometimes, for one reason or another, I actually do get bothered by my inability to understand how a given sound is being generated and will ask; again, I occasionally get a response of, "I'd rather not go into that." Again, fine.

But more often than not, I'll simply go with my best guess and use the descriptions of what I think is the instrumentation as ancillary color for the real meat of the music, which is the music itself. Whether a sound has been generated by a computer or a bass saxophone is, while perhaps interesting, entirely secondary.

So, Rafael Toral's disc, "Space", came with something of a statement of intent--not quite a manifesto but a fairly clear exposition of what his current aesthetic goals are. However, there was no instrument listing. Now, I know from past experience, limited though it's been, with Toral's music that, while known primarily as a guitarist and electronicist, he'd also dabbled in a bit of trumpetry. At least, I think I know this. Hmmm....you know, googling around, I can't find any specific reference. See that? In my head, I'd pegged Toral as a trumpet dabbler. So when, on the disc in question, trumpet-like sounds emerged, I automatically assumed the instrument was present, even if it had been electronically enhanced so as to significantly alter its sound. That's another thing--you can usually pick out something about a given instrument's phrasing, attack, etc. so as to recognize it even when blanketed by tons of altering processes. So I went and wrote a little about how much trumpet was played, how it referenced electric Miles as well as Bill Dixon. The Milesian connection was further enhanced by some obvious electric piano usage--except that it wasn't electric piano, it was manipulation of a sine wave generator by a glove with sensors. All this Rafael explained to me via e-mail after I'd sent him a copy of the review.

I appended the correction in the comments section at Bags. I imagine there are a number of readers who chuckled at the errors. Of course, given my druthers I'd rather have gotten it right the first time, but in the context of how the disc was presented, I don't think it amounts to much. The music succeeds or doesn't on its own merits, not on the listener's knowledge of the instrumentation, though if taken to a far enough extreme, that could enter into it, I guess. ie, were the whole thing derived from a software program and the push of a button.

Anyway, this possibility is part and parcel of much of the music sent my way, wrapped in mystery and intentionally so.
Posted by Brian Olewnick at 8/31/2006 09:43:00 AM