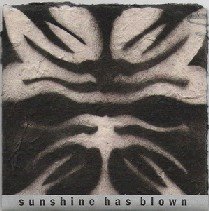 Have I mentioned how much excellent new music is emanating from Australia these days? I think so. One relatively young guy there is Joel Stern. I think I first got wind of his work through some collaborations with Anthony Guerra and the neatly named label, twothousandand. Stern works with electronics and field recordings for the most part, but also puts in some time on more traditional instruments. Recently, I received a couple of discs from the less neatly named musicyourmindwillloveyou label, an imprint I'd never heard of. In fact, why I was getting them, I had no idea as the return address on the package, iirc, read "mymwly". The discs, this one included, provided no info other than (I presumed) the band name/album title. It was beautifully designed, though, that Rorschach (sp?) - like image having been printed on a delicate, tissuey paper wrapped around thicker black stock. Better, the music was both fascinating and unique, a dreamy blend of the recognizably musical and the abstract, keeping the floor well-oiled enough that you are never quite sure of your footing. (there'll be a full review posted at Bags in the next few days). As it turns out, Sunhine Has Blown is a Stern-organized duo with Adam Park (plus guests) and represents yet another facet of his musical persona.

There's an overtly dopey tendency to think of Australia as one place so to say "Australian new music" severely over-simplifies the issue but, that borne in mind, there's still an amazing amount of quality work coming out of that nether continent. Distance, I assume, inhibits too much touring in Europe and the States, which is a shame. The handful of Aussies I've met from the scene (Guerra, Michael Graeves, Will Guthrie) have been outstandingly fine people as well as wonderful musicians. It's too bad if they get relatively short shrift due solely to geographic isolation. Give Oz some.
Posted by Brian Olewnick at 8/18/2006 10:58:00 AM