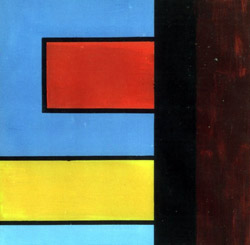 I posted a review of sorts of 'between', the latest release by Keith Rowe and Toshi Nakamura, at bags yesterday. Very difficult work to write about as there's always more than the music to talk about whenever Rowe is involved but explicating it without sounding exceedingly vague or impossibly abstract is tough. How is their work crucially different from your garden-variety eai pair? Well, it is, but parsing it out ain't easy.

I assume he wasn't the first to do so, but Dali used to write about tiny but hugely important steps taken by painters, little adjustments that made all the difference in the world. Raphael taking the model of Perugino's Virgin Mary's and given the heads just the slightest tilt, for instance, but that tilt opening up the floodgates to vastly deeper human-ness in painting. Vermeer expanding on Pieter de Hooch's interiors--the subtle placement of objects, the more luminous treatment of lighting--in one sense the two's work is very similar but the small-ish steps taken by Vermeer catapult his work into an entirely different realm in other, more important, senses.

So if you have two fellas working with ticks and drones (to overly narrow it down)--how is what they're producing different than two other guys producing "similarly" abstract noise? Why is a smear by de Kooning more beautiful than one by Joe Art Student? Well, context, of course and as part of that, awareness of one's suroundings, placement of this instead of that, here instead of there. It's a poetic construct, basically, one that the observer either perceives and appreciates or not. I wish it didn't come down to this degree of subjectivity and part of me still thinks that, conceivably, it doesn't have to (though I've been unable to delve deeply enough to explicate it in words, if it's possible at all) but that's the best I can do. There's some satisfaction derived from the appreciation of other listeners whose taste and judgment I respect seeming to come around, more or less, to similar thoughts as I have. But who knows?

It's interesting how resistant certain listeners remain to this mode of criticism, though. There's still a mind/body dualism out there that doesn't want to deal in abstractions, even when abstractions are explicitly one of the creators' concerns. I think many listeners simply don't want to have to think about too much, just to listen. Which is too bad.
Posted by Brian Olewnick at 8/04/2006 10:08:00 AM