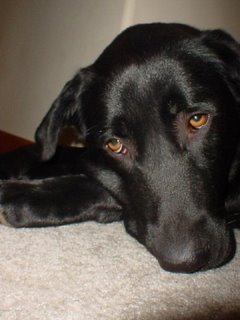 Bored. At work. The software I use here that comprises 90% + of my job was recently upgraded. In doing so, the company involved screwed up some of the database. The guy at the company who did this and who's the only one knowledgeable enough to repair his blunder, is on vacation until tomorrow. So I don't have a helluva lot to do. Happily, the environment here allows (more or less) me to fiddle around somewhat. I can't quite play Weboggle but I can do things like this. It's tough to work on my growing backlog of reviews since it actually helps to listen to the music when doing so (!), something I can't pull off here either. And not wanting to trundle in bio documents makes working on that a no-go as well, though sometimes I'll test some ideas in Word here. Thank goodness for the Net, though--I have no idea how I survived days like this pre-Web. Took walks, chatted, surreptitiously read a book; dunno.

There's only so much discussion group browsing you can do though. Jazz Corner is fairly active, Bags less so, IHM, a bit. The JC List is OK, though way too much nonsense there. So I resort to this little outlet.

Gave a second listen to a really nice recording by Seth Nehil and John Grzinich last night, "Gyre" on the Cut label. I think (I have to investigate further) it largely consists of field recordings cobbled together in the studio, though the result often sound half-electronic. Good, rich stew of sounds. I've heard enough fine things in this general area, that part of me's beginning to wonder if it's fairly easy to assemble such a concoction given a decent ear and some well-chosen sources. Not that it matters in the end. But similar to how a certain mode and quality of eai (let's call it ersatz-Muller) seems to be attainable without very much difficulty if you layer enough elements atop one another, I sometimes get a sneaking suspicion of the same in the field recording (adapted or otherwise) sub-genre. Still, the best of it, like Tsunoda or Jerman, has that ineffable poetic quality that separates it from the routine even if it's virtually impossible to quantify to unconvinced ears.

I received a new naturestrip disc yesterday by two hitherto unknown to me musicians, Eugene Carchesio & Leighton Craig. Recorded in one of their backyards, it's a combination music/field recording session--really no more than what it presents: two guys playing music outside with all the ambient noise impinging. Kinda nice, relaxed stuff though, as listener, I found myself waffling back and forth between intent listening (not so rewarding) and hearing it as though it was coming from the yard next door, as part of the ambience (better). Curious to see how it holds up.

Also an odd-looking thing from Rastascan, a kind of Music Minus One for improvisers, called Music + One. 22 short solo improvs by 22 musicians, designed to be one component of a subsequent improvisation with more musicians. If that's clear. So I think (I didn't get around to playing it yesterday), the recording consists of 22 tracks with 2, 3 or 4 musicians where one of the "musicians" is a pre-recorded tape by someone else. Hmmm.....

Been meaning for a long time to read some Philip Roth (never really have except for "Portnoy's Complaint" as a snickering 14-year old, and even then just concentrating on the "good parts") so when Mom asked what I wanted for my birthday a couple weeks back, I said, "How about some Roth novels?" Received same yesterday: "My Life As a Man", "Our Gang", and "The Great American Novel". Began the former last night.
Posted by Brian Olewnick at 8/22/2006 09:33:00 AM