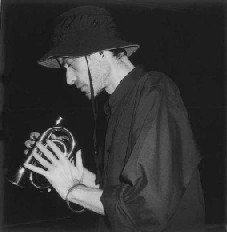 I received two discs from Rafael Toral recently, his own solo album "Space" and "The Tone Gardens" by Portuguese trumpeter Sei Miguel (pictured here) on which he performs. Both appear to be consciously concerned with extending the current state of free improvisation past ruts they perceive and both, interestingly enough, look specifically toward jazz forms to do so, a quixotic notion perhaps. Toral states such goals explicitly in notes that accompany his disc; I'm making an assumption on Miguel's part, not being familiar with his prior work. Both recordings "succeed" on occasion--the Miguel more so than the Toral, to my ears--although as one would expect, it's a rough road, strewn with old baggage that's extremely difficult to steer around.

As its title implies, Toral's disc is a bit spacy. Though he's known more as a guitarist and electronicist, he plays a lot of trumpet (processed) here and if you're looking for a general point of reference, Miles' 70s work might be as close as you'd come, though sans the funk. He's basically playing jazz formulations even if they're atomized along the way. It's often uncomfortable, especially to listeners used to more "standard" eai, but on those several occasions when things gel, you can begin to get an idea of what Toral might be shooting for. It's more gestural than most post-AMM improv (which is an issue in an of itself--one path could lead in a Le Quan Ninh-type direction where flamboyance trumps musicality) but who know? maybe that's at least one thing the music needs.

More on the Sei Miguel disc later after more listens, but the impression I get is that his amblings down a parallel pathway are more natural to his own musicality, more unforced. When he arrives at the post-Milesian stew, it feels more "right".
Posted by Brian Olewnick at 8/28/2006 09:06:00 AM