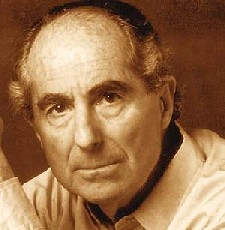 Roth report: Majorly disappointing thus far. I made it through more than half of "My Life As a Man" before I gave up, tired of page after page of misanthropic whining. It's difficult not to read autobiographical qualities into Zuckerman (I assume, not having followed Rothiana, that this is a given) and you sit there saying, "Why are you telling me this? I don't care!" Tedious in the extreme.

I made it only about 20 pages into "Our Gang" before tossing in the towel. I suppose it's possible that, in the early 70s, this sort of paraody could've been considered provocative. Maybe. But it's just so juvenile--renaming political figures with childish noms de satire (Trick E. Dixon - har! Almost as funny as Ronald Ray-Gun or Al Bore! Why construct an intelligent argument when youe can just call someone a name?!) and, on top of that, setting up enormous softball tosses that he can send sailing out of the park, conveniently turning the Nixon character into a laughable buffoon, rather than a complex, intelligent and evil creature. Thanks but no thanks.

I began "The Great American Novel", therefore, with some amount of misgivings. Still in the Prologue and it's bearable (it's about baseball, after all, giving it a leg up) but we'll see.