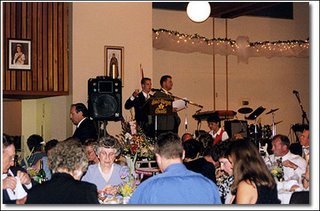 We had to go to a wedding reception Saturday night. I hate wedding receptions. In this case, the bride was the daughter of someone Linda works with closely so she was obligated and I dutifully tagged along. Even if some portion of the attendees are people you don't mind hanging around with (in this case, there were two or three co-workers of hers I knew who are fine but with whom any mutually interesting subjects for conversation evaporate in three or four minutes), the atmosphere in general and the music in particular are almost always loathsome if the whole shebang is done along "traditional" lines. I'm fairly confident that there's a law on the books, for example, requiring the band to play "Twist and Shout", "La Bamba" (the same song, really), "Hot, Hot, Hot", etc.

In this case, the families were Ukrainian with, apparently, rather strong ethnic ties to the culture and the band reflected this: a quintet of saxophone (the guy brought out a curved soprano for one piece and made frequent use of an electronic "reed"--I forget what it's called--that could sound like a trumpet, etc. when called for), accordion, guitar, bass guitar and drums. So the repertoire wasn't as awful as is usually the case, interspersed with a bunch of traditional Ukrainian tunes that wouldn't sound out of place on a Guy Klucevsek album.

But....eventually the crapola emerged. The initial onslaught was led by "Brown-Eyed Girl". Now, sitting here at the moment, though of course I recognize the song, I couldn't tell you who originally performed it. I'm rather proud of that fact. But I'll ask the guy behind me in the office. Hold on. Wow, Van Morrison. Huh, used to like him in HS. Anyway, regardless of what one thinks of the song (me, not much), it's just so weird to see the crowd, virtually en masse, rise up to the dance floor, "la-la-la-ing" for all they were worth, in throes of ectasy. I never fail to feel as though I've landed from some distant planet. There were a bunch of doctors present, people you know have a certain amount of education. Didn't matter. What is it that gets people into these states of group frenzy? What is it about "Brown-Eyed Girl" that triggers such uniform reactions? I suspect some correlation between "Brown-Eyed Girl" and brown-shirted boys...

Of course, the same response occurred later on with the inevitable (I turned to Linda and gave a rueful smirk) "Twist and Shout". The joy and release experienced by these people when given an opportunity to go, "ah, Ahh, AHHH, AAHAHAGAHGAHAGH!!!" and fling their arms in the air is so depressing to behold. The combination of comfortable nostalgia with the phony notion that they, in their youth, were part of some wonderful thing, doubly phony in that they likely weren't part of it and it wasn't wonderful anyway. Seriously creepy. But the uniformity, the group-think, is what really irks me. You're confident that they all (well, let's be generous--95% of them) go home and watch the same crappy TV, read (if they read) Grisham or King, buy Leroy Nieman prints, vote Republican or Democrat, etc.