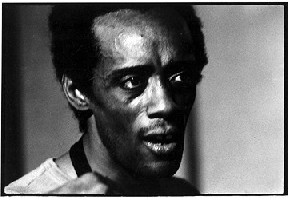 Lunching with Pete Cherches and Steve Smith yesterday, the latter recommended the Destination-Out! site: http://destination-out.com/, a fine place that specializes in mp3s of out-of-print avant jazz, especially from the 70s. The current feature is Marion Brown's lovely "Geechee Recollections". I should mention Pete's and Steve's blogs as long as I'm at it: Pete's is a wonderful, often very funny food-oriented one: http://petercherches.blogspot.com/ while Steve's is pretty much about music, at least as much as he can squeeze in between his TimeOutNY and NYT gigs: http://nightafternight.blogs.com/. Check 'em out.

Brown, in addition to possessing one of the greatest faces in the music, released a couple of super fine albums on Impulse! in the 70s, the aforementioned "Geechee Recollections" and its follow-up, "Sweet Earth Flying" with both Paul Bley and Muhal Richard Abrams on piano and electric piano. Muhal's feature on the latter might be my single favorite example of his playing. There was a third in this Jean Toomer-inspired trilogy, "November Cotton Flower", issued on the Japanese Baystate label, also real nice. Additionally, Amina Claudine Myers released a gorgeous collection of his works for solo piano, "Poems for Piano", on Brown's own short-lived label, Sweet Earth, in 1979. This is not to even mention his great work with Shepp in the 60s and the ECM recording (which I don't own for some reason?!), "Afternoon of a Georgia Fawn".

Last I heard, Brown was in western Massachusetts, not in very good health. A very under-recognized musician and a very beautiful one.
Posted by Brian Olewnick at 9/06/2006 03:25:00 PM