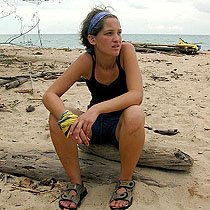 I admit it, I'm a Survivor-holic. Have been since the very first show. There was something that immediately grabbed me from a gaming aspect. Even with all the garbage that's shoehorned into every season (the product placement, the enormous hokiness of the "tribal council", the inevitable condescension toward whatever the local population happens to be) as well as the working knowledge that each episode is the condensation of three days worth of activity and, hence, has been edited into shape for the desired dramatic arc. Even so....the damn thing works. At bottom, despite all the nonsense, you have a group of people living together in extreme conditions for an extended period of time and having to deal with each other. That just cannot help but be fascinating.

The way the game's set up, you can't even really strategize to any great extent except to avoid doing overtly stupid things like lazing out at the beginning or generally acting in an assholish manner. Otherwise, it's almost a random event and has been since the second series. In the first, when most of the contestants had no clue what they were doing, only the inimitable Richard Hatch understood that it was a game and that strategies should be employed. Whatever the gaming aspect, it's inevitable that interesting relational dynamics develop and those can be great watchin'.

The new season, with its racially segregated initial groups, begins tomorrow. As someone who despises that part of the whole Olympics gestalt, that nationalist or ethnic rooting, I have my misgivings, but we'll see.....
Posted by Brian Olewnick at 9/13/2006 04:21:00 PM

Appreeciate the candor-pro wrestling and Project runway are some of my forbidden pleasures. Nice that you added picture. You look like you with some years added ad a few more pounds. Doh.

I don't show the years so bad, but the lbs sure love me.

I'm apparently one of the few people alive who've never seen Project Runway and, given my utter loathing of anything having to do with fashion, likely never will. But, damn, it gets brought up constantly.