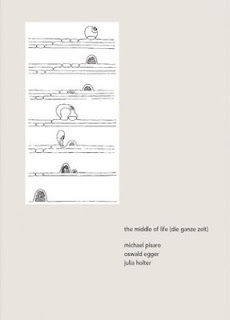 One of the defining characteristics of Pisaro's music, I find, is that his generally lengthy works really need to be heard/experienced as an entirety, which requires the listener to stand back a bit and to retain memory of a great deal of information and its interrelatedness. Happily, the elements themselves are, in a sense, "simple", easily graspable on their own, making their subsequent conceptual reintegration not quite as daunting as it would be otherwise--but still something of a feat. Listening for the first time to a work like "the middle of life (die ganze zeit)", which has as its central focus lines from that text by Oswald Egger, read by him and others, but interpolated with all manner of sources, including field recordings and music from Julia Holter, one may have the sensation of a string of loosely related vignettes, soft and lovely in and of themselves. The tough part is mentally calibrating all of these episodes into a whole, which whole (in my head, anyway) isn't a terribly graspable object either, more a nodal kind of thing itself, like a relief map indicating irregularly spaced disturbances but all lying within the same substrate.

So you have an opening sine tone, then another, than a very deep one. You hear wind, then Eggers reading his text. Other readers follow at odd intervals, in various settings, in English and not: Taku Sugimoto, Kristin Haraldsdottir, Kunsu Shim, Graham Lambkin, Didier Aschour, Lucie Vitkova and Holter. After the initial text, there's some extremely lovely, spare piano, over which the speakers cycle, their words buffeted by the sounds of the forest referred to in the first line which is itself, I think, from Dante (not sure of the connection): "In the middle of life, I found myself in a forest with no path." (wiki gives the line as: "At the midpoint of the journey of life, I found myself in a dark forest, for the clear path was lost.") There ensues a series of gentle shifts, almost like overlapping film slides, at first very much occupied with that outdoors environment, the odd recitation emerging. An ultra-soft flute is heard accompanied by a faint voice, both combing to sound like a ghostly madrigal, underlaid by sine tones high and deep. That episode ends, about 19 minutes in, introducing a brief pure single-note guitar/sine sequence. Egger reappears, reading various texts, in German, selected by Pisaro, amidst a more urban soundscape laced with sine-age which gradually accumulates into a richer, even dramatic organ-like set of tones. There's distant flute playing from Antoine Beuger that seeps in now and again as well, a wonderful sound, as well as, apparently, an excerpt from Pisaro's "Ascending Series (5.2), though it's beyond my powers of observation to isolate it.

Some 39 minutes in, Holter appears, singing wordlessly, plaintively (again recalling, to these ears, medieval music), soon double-tracked; very unexpected and moving. After a few minutes, Pisaro appears on piano, playing Holter's "For One or More Voices", anther gorgeous/spare piece of music, over which Egger is heard once again, cosseted by recordings evoking the sea, birds, wind, concluding as gently as it had begun. You're left at a different point, though it's hard to discern exactly why it's different. 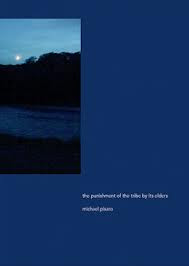 This one is a kind of bifurcated creature. It opens with sets of sine tones buried a mile or two below the surface of the earth. It pulses gently, for a while with surprising regularity, pushing its way toward air, breaking ground in an urban setting, the sound of a classroom down the hall, the laughter of teenagers. The scene shifts, a young girl comments, "It looks like we're in Texas." though in fact, she's in Austria. All of this, even the ghostly laughter, is very somber. Weather occurs, rain and thunder, with a light bell chiming beneath, a faint antecedent of sounds yet to come. The bell sounds more brightly, inevitably imparting a ritual sense, a ragged gong is struck, the bell begins to split, amoeba-like, its shards morphing into sines (this is a very beautiful passage).

Roland Barthes, or someone reading him, talks about power relationships being present in all areas, not just the political ("mon nom est Legion") including the arts, and how the object of the use of that power is made to feel guilt. Serene guitar (Pisaro) ensues, contemplative, with a slightly sour tinge; given what follows and the nature of the Barthes quotes, one is tempted to hear this passage as a kind of sacrificial lamb to the forces of the adolescent, innately misogynist power chords of rock, here sampled from the Rolling Stones and Black Sabbath (I think. I did have fun imagining Pisaro flailing away at his axe...). When they arrive--and it's quite a shock, the volume and incongruity--they possess that swagger, the eight-second chords relentlessly surging, annihilating everything in their path, a hollow, pounding beat buttressing them from beneath. It's exciting at the same time as being disturbing, the way one almost automatically reacts to such strength in rock and then (perhaps, hopefully) questions the nature of one's reaction. Pisaro takes over once again, hear in a more Loren Connors mode, the machismo having been drained somewhat, the melancholy remaining.

The work closes with a complex series of low hums, sines and, I suspect, much else, a compressed clay of sound, a taffy-like conglomerate baring rueful overtones. including echoes of the guitar strutting as if to say, "These things aren't easily shaken off".

This and the above release were conceived of as a pair of sorts, an opposite pair--Pisaro likens them to dark and light branches on the same tree--and that feeling comes through. Both are powerful works, though that power doesn't dominate, but seeps in and merely awaits recognition. Very highly recommended, both.