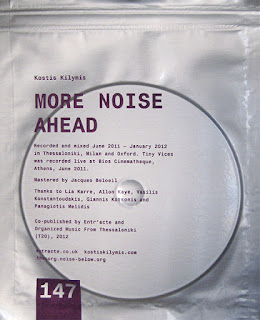 An aspect often missing in experimental electronic music is a sheer joy in the manipulation of sounds, a kind of serious playfulness. The ten short tracks (total disc time: 36 minutes) that Kilymis has assembled here abound in this feeling, giving the picture of a (very talented) kid in an extremely well-stocked sandbox. Using all manner of electronics, software, cassettes and "anticipation", he fashions pieces that are almost songs, in a way, though bearing no vestige of melody, rhythm or anything like that, but a kind of lyrical sensibility nonetheless. Another element they're happily deficient in is any overt reference to 60s-style tape music, a quagmire that seems difficult to avoid judging by much of what has passed this desk. The music here reads resolutely modern. It's not spare, not at all, but Kilymis manages to find new creases in a well-worn fabric. A track like "Tiny Vices, Part 1" contains a pulse, grinding metallic sounds, electronic blisters and more, all arrayed into a structure that's both solid and flexible, giving the impression of a potentially large field still to be explored. Where vague song-like formations do coalesce, as in "A Crutch", the result is also clear and vibrant, no Fennesz-y like smudges or Radian-ish quicksteps. Even the urban field recording which ends the disc (sporting the odd title, "Old Tape Worms Direct") has an openness and freshness to it that many things in this area lack.

In sum, tremendous fun to be had here and beneath the fun, some serious sound investigation. Get it.

Erst dist is also carrying it. 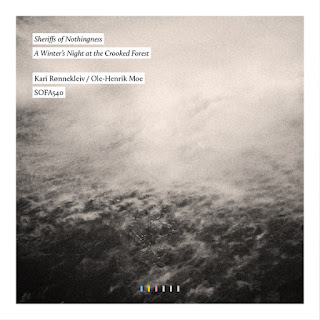 The direly named Sheriffs of Nothingness are Kari Rønnekleiv (violin) and Ole-Henrik Moe (viola). The music is resolutely harsh, traditional tonalities only surfacing intermittently between the far more frequent raw sound of grainy bow on strings. It's quite dry; one can easily imagine rosin dust surrounding the players. Often, a raspy, seesawing drone underlies slightly more rapid playing but the overall character is relentlessly astringent--makes your ears pucker. On "Dysfunctional Folklore with Brian O." (Hey! wait a sec! I knew I reviewed their previous recording a couple ears back and made an allusion to the Scandinavian fiddle tradition, but I take it that it's another Brian O.) they get into a lopsided folk tune that's a bit of fun, though of a limited kind. The title track also swirls around rather nicely, but it's the sort of idea I'd love to hear developed for more than the 3:21 allotted here. "Blizzard:, clocking in at 14 minutes, supplies the length, consisting of cascades of rapid buzzsawing of varying dynamics and works well enough though here, one would have liked a bit more variation. I love singleminded intent but the object of focus needs, to these ears, to have more that's capable of being wrung out of it. The final track, "You are walking on a sleeping summer", whispers a bit (maybe talking in their sleep); the moaning, wispy nature of the strokes is very fetching and, again, seems to indicate a pathway worth exploring at greater length; it has an intriguing vocal quality, very nice. A mixed bag, though...