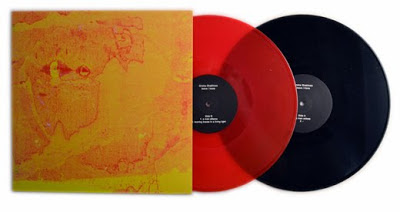 When writing about contemporary electro-acoustic music, there are terms that are invariably overused, perhaps none so much (at least by this writer) as, “grain”. But it and its relative, “granular”, are so good, so connotative of such a salient aspect of our lives, from the natural grain of rock, wood and metal to the electronic grain of video screens and other pixilated objects to, of course, the sound world, that it’s tough to do without.

I’ve surely used the term in the past as one descriptive of Grisha Shakhnes’ music, under his own name or his nom de musique, Mites (small bits!). It was just so clear, the layers of particles, of specks that made up the sounds, giving the impression of being open to a burrowing, fractal inspection of their qualities, of there always being more strata below, just outside the audible range. With grain tends to come a certain amount of opacity, not necessarily a negative thing at all but it’s fascinating when, as in the release at hand, that torrent of small morsels begins to be interwoven with streams of air and light. Not entirely transparent by any means, but with a quotient of new a medium, free space, interwoven to a degree.

“leave/trace” begins with rapid scratches, possibly 78rpm vinyl, thin but relentlessly iterating, before things burble up from beneath. More so, I think, than in prior releases (at least more overtly), Shakhnes utilizes field recordings here, contributing to that more open feel. As the clicks fade, the offset between mysterious clanks and the wonderful sound of wind against mic comes into the foreground, the kind of apposition that forges a true spatial sensation and, in some of us, occasions shivers of sensual delight. That first track intensifies, element after element being introduced but always—and this is hard to quantify—with a sense of space surrounding these “objects”. Kind of like an apparently solid piece of matter, a lump of coal say, that yields upon close inspection the revelation that it’s filled with airy passages. This piece take up most of Side A and, rather abruptly, trails off in some muffled speech and a return of the initial click before sliding into a brief (if one so chooses) encounter with an entirely other environment, what seems to be a playground replete with squeaking equipment (swings? see-saws?) and cavorting kids, though a background hum of engines casts a slightly threatening shadow. After only a couple of minutes the side ends, but in a locked groove. Now, I’ve been a sucker for these things since Escalator Over the Hills days but they’re often an awkward device. Not here. The loop is seamless and absorbing; I generally let it play for at least five minutes…

Side B opens with the album’s densest, most aggressive and strongest track. A cruel electric hum and somewhat anguished rumbles begin a piece that only gets darker and more…voluminous. This may be more akin to earlier work from Shakhnes, a similar tightly-packed feel but with a huge surge toward its conclusion, a massive swell that picks up all the accumulated detritus (including those swing sets and youngsters!) and hurls it against the breakwater. Repeated listens cause me to thin that there may be more internally recycled material in play than was apparent at first blush. The closing track seems to recapitulate some of them, backwards perhaps, but in more relaxed and meditative manner, once again returning to that relatively oxygen-filled realm. This sounds closest to “traditional” work in the area, recalling Ferrari, his beach now overrun with heavy boats and a thrumming power plant. The breathing quality of it is stunning, brooding but at peace, a fine way to conclude.