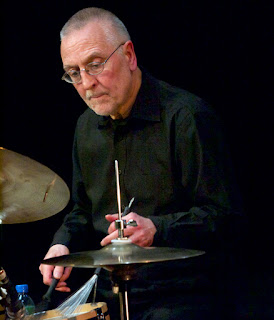 Just a couple of notes on my first few days in Paris, music-wise.

On Sunday, hooked up with my old friend Jacques Oger (who, happily, lives only a ten-minute walk away) and it turned out that The Ames Room was playing that evening, in a wine cellar of a bar near the center of the city, so off we went. Much fun to surprise Will Guthrie, who I hadn't seen in about five years, maybe. Seeing the trio live made clear the structures they use--not sure if it was apparent on the recordings and I've just missed it. Each player constructs brief phrases, perhaps 2-6 seconds long, and more or less repeats them a varying number of times. This results in a kind of brutalist/cubist effect, a modular interlocking, the phrases being of unequal length, iterated a differing number of times, being essentially different (but always rhythmic in some sense), thus enabling a very exciting, propulsive music, really very different from free jazz for all the surface similarity. Jean-Luc Guionnet was extremely brutal, with short, choppy lines that recalled Roscoe Mitchell at his harshest while bassist Clayton Thomas more often chose calm, deep patterns that reminded me of Malachi Favors. Guthrie was a monster, really an unbelievably furious, intense and exact drummer, creating motif after motif, sometimes with delicious hesitations.

They did two pieces in this fashion for the first set and then loosened the bolts just a tad for the second round, elevating the music significantly. If I have a caveat, it's that part of me thinks, "this is a fine idea for a piece or set of pieces, but do I want to hear this attack time after time or does it reach a point of diminishing returns?" I'm guessing it would pall on me after a while, though I leave open the possibility that by pounding away at it, they could find themselves breaking into some unexpected area, something that could surprise the trio and audience alike. Hard to say.

Fortuitously enough, Les Instants Chavirés was hosting the Eddie Prevost/Sebastian Lexer/Seymour Wright trio last night, providing more than enough impetus to make my first visit to that fabled venue. Nice room! NYC should be so lucky. Had the additional pleasure of meeting Lucio Capece, something I've been looking forward to for many years. With regard to Prevost and Lexer, the music was about what I anticipated: Prevost spent the vast majority of this time bowing either his large gong or hand-held cymbal--he does it so beautifully but I often longed for some different sounds--while Lexer logged many minutes inside the piano, sometimes electronically filtered. Again, wonderfully done but those moments where he returned to the keyboard, especially the softer playing. made you ache for more of the same. Still, that could be part of the deal, to induce such longing. Wright was a bit of a surprise and I'm still wrestling with his contribution. In brief, he was most often very shrill and strident, either when utilizing just the upper portion of his alto or its entirety. He never fell into a free jazz mode, but it was hard to reconcile the super-high, very loud multiphonic squeals and squawks (exquisitely controlled, I should add) with the music from his two companions. Obviously, this was a clear choice on Wright's part and one can easily imagine getting a bit tired of quiet, breathy reed playing and searching for an alternative. Not sure this is it, though there were moments when things jelled very well. Wright ended the first set and began the second with some wonderful low burbles on the detached neck, wryly amusing.

Did I mention that the food here isn't half bad?

what was that waiter's name?