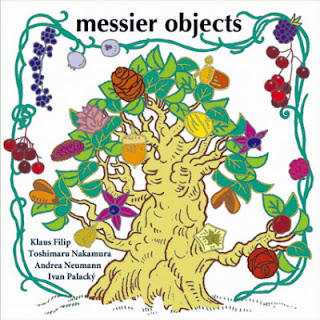 Messier objects, as we're all aware, were astronomical detritus that gave the appearance of comets but weren't, aggravating comet hunters like Charles Messier who compiled a list of the things, numbering 45, so as not to confuse him in further cometary quests. Their actual nature varied widely, including several pretty spectacular nebula such as the two titular ones here, the Carb and Trifid.

I'm hesitant to draw any overt connections between a ppooll/nimb/inside piano/Dopleta 180knitting machine colabration and a vast aggregation of starstuff, but there is a really strong sense of structure hear, of tendrils expanding into the void. The mix of sounds is wonderful, Neumann (I assume) early on summoning gamelan-like tones from her stringboard, with rough, grimy rumbles, dry scrapings and other material circulating around and through. The music doesn't dwell more than a few minutes in any particular area, shifting, often abruptly, from relative smoothness to a blocky, harsh sequence, static pops against brutally struck, non echoing strings, for instance. Both tracks, 40 and 16 minutes, the first live the second recorded at Amann Studios on two successive days in October, 2011, embody a kind of improvisation I greatly enjoy, wherein the listener needs to hear the piece in its entirety, mentally calibrating and reconciling it in retrospect, grasping the form and relationships after it's over. The range of sounds is quite impressively enormous here but at the same time there's a cohesion and constant sense of purpose and direction. This is all blurry sounding, I realize, but it's quite hard to describe; the sounds themselves are quite coherent and identifiable but it's their mix and the implied propulsion these mixes provide that gives the music such force and staying power. 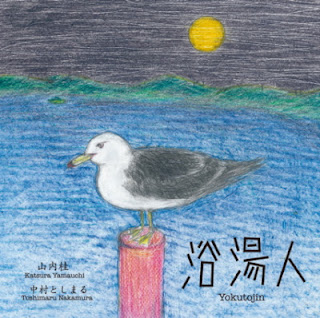 Things start out well enough, on low simmer with Yamauchi reining in his alto and Najkamura creating some fine, eerie tones and washes, but some eight minutes into this 1/2 hour recording, the pair launch into a wailing, free-jazz explosion that doesn't sit too well. Toshi can be interesting when he works loud (as with Rowe on the sunspot track on 'between') but here it's an unwelcome distraction. They settle down after five or so minutes but have at that point begun to establish more of an episodic set than a cohesive one. A few of the segments work well enough as discrete units but more of them suffer forms saxophonic over-exertion and the whole just never comes together for me. 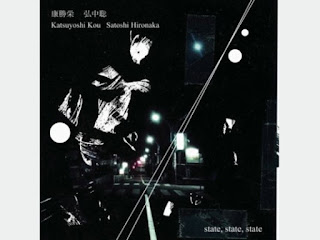 Four tracks of guitar and drums. On "State", Hironaka offers some quite fascinating percussion work, sounding like he's using tuned drums of some kind in an off-kilter, quasi rhythmic manner, almost as if someone had taken a slice of Xenakis' "Rebonds' or 'Pleiades' and irregularly looped it. As it happens, drums and guitar were recorded separately and very brief blank spaces were inserted post-production into the drum tracks, creating beats that are "off" just a bit. Kou's contributions are more staticky noise with the odd pure note, a decent enough offset though it was the drums that held my attention. "sTate" (you get the titular idea), the longest track at 27+ minutes) begins in quietude before moderate guitar squawks appear and that turns out to be more or less the path--small squalls of guitar (it's a solo) really not creating enough tension or filling up of (or emptying) space to quite justify its length. Again, it was treated after the fact, adjustments made to "confound listeners' expectations"; well confounded, perhaps, but not so moved. Then "stAte" returns to the propulsive drumming (solo, overdubbed), here with more of a rock feel, screeching in the distance that I would have guessed was guitar but I suppose is of a cymbalic nature and things work just fine, like a lost Material cut. The final cut, "staTe" (unaltered duo), finds a slightly different path, the drums lighter but still rhythmically skittering, the guitar continuing its oblique, metal-scraping-metal commentary, not bad but leaving me a bit unsated.

Tough album to recommend, just too few really good ideas to latch onto, but curious to hear further music, especially from Hironaka,