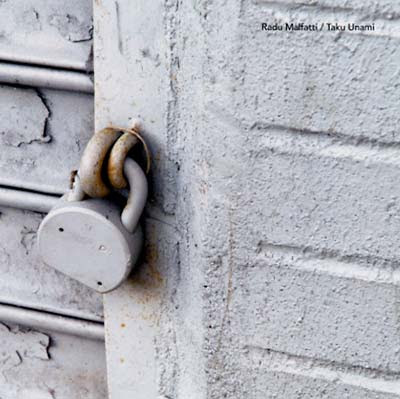 Unami performed several times during the AMPLIFY:stones festival in 2011. All of the shows at The Stone in which he participated involved his construction of mini-edifaces made of large cardboard boxes, often connected by twine and bestrewn with measuring tapes. Noise was necessarily made during these actions and I recall going back and forth as to whether this was incidental to the proceedings or should be taken as an essential part. With Malfatti, who steadfastly and gorgeously projected his softer-than-soft beams of tromboneliness into the room, the latter seemed more appropriate. The box-building became somewhat problematic when it was repeated a few times, with different partners, though I guess one could level the same "criticism" at a Malfatti--somehow this doesn't seem to fit though, which perhaps has more to do with prejudices about musicality than anything else. Unami's activity implied a kind of narrative, if only that of building and (maybe too automatic) destruction and it was questionable how much blood could be wrung from that particular stone. Near the conclusion of one set (I forget with who, perhaps Rowe) he left the cord that would through the piled boxes in the hands of a front-row audience member and walked to the rear of the space, where he gave instructions to pull and, of course, the containers came tumbling down. My immediate thought was that it would have been far more interesting had Unami simply exited the venue, leaving the choice of how to conclude the performance (indeed, whether to conclude) in the nervous hands of that audience member.

This being said, there was also something oddly satisfying about Unami's sets, especially this one with Malfatti. One clear reason was the apposition of the relentless calm/incisive placement of sound provided by the trombonist vs. the carefully considered but active movement of Unami. The latter struck an intriguing balance between care in construction and nonchalance when parts collapsed ahead of schedule. He was almost ant-like in his objective of building his particular hill despite any momentary obstacles. On the other hand, one could shunt that part to one side, regard it as peripheral, and concentrate on Malfatti's spare commentary, noting its inherent beauty and how, as can be heard hear, it plays against a siren of a vehicle racing up Houston St. outside the venue. The flickering back and forth of this attention range was fascinating in and of itself.

This begs the question: how valuable is a recording of the same event? I love the instrumental listing: Radu Malfatti - trombone, Taku Unami_______ (actually, no underlining but i can't get pure spaces to register here) But if you weren't in attendance and, moreover, if you were innocent of any knowledge as to what he was doing, it might be easy enough to listen to this as an ultra-low key Malfatti performance with some bumping and rustling noises occurring elsewhere in the room. For some of us, including this listener, that could well be enough and Malfatti is just wonderful here, even injecting the odd three or four note sequence every so often; feels like a whole sonata!

The recording, for me, comes across as far more restful and even meditative than did the concert to the extent the latter contained some amount of tension in the uncertainty of what Unami might do. It's kind of a different bird, then. I enjoy it a great deal and would highly recommend it but I'm curious to hear how it strikes those ears that were not in attendance.

this is the one i didn't write about, as i think being in attendance is crucial to an evaluation that might conclude more than, as you say, here's solo malfatti with room noises(and i have spun it quite a few times, curious to see if i might discover otherwise).

yeah, as I've told both of you guys separately, I think one of its real strengths is in contrast to the Rowe solo from earlier that night, creating a totally different but equally appropriate atmosphere. I also love the intro/outro (of course unscripted but might as well have been) and the way it fits into Radu's other releases from that month (two recent b-boims) as well as the two previous duos with Unami. but of course I was there too...

thanks for the reviews as always, Brian!