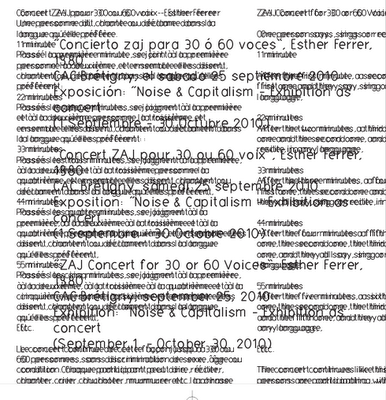 I hadn't previously been aware of Ferrer, though she's apparently quite prominent in Spain and elsewhere (and married to Tom Johnson, fwiw).

This performance was part of a "Noise & Capitalism" exposition, organized at least in part by Mattin. The idea behind the piece, I take it, is to both illustrate the banal, humdrum nature of the workday of a victim of this system while, at the same time, evoking strategies that might be employed to alleviate and, possibly, transcend that system.

The text is recited, sung, yelled and whispered by however large the throng is that participates and consists of a real time recital of numbers representing the passing minutes; as the minutes progress, we go from "uno minuto" to "dos minutos", etc. (I take it that it's Spanish, not Basque, but I could be wrong) How these words are stressed, enunciated, subjected to dynamics or emotional extremes varies over the course of the 40 or so minutes at hand. I'm not sure if a score was involved or, as I would rather hope, decisions were made cooperatively within the group. There are passages that are more or less in unison, though I could imagine them having been arrived at during consultation away from the main action at the time. Sometimes the sung numbers take on the character of a Catholic service, intoned repetitively and with (mock?) solemnity. But they may just as likely be whistled, spat out, hummed or screamed. If anything, I'm reminded of works like "Cardew's "The Great Learning" where the massed voices have a similar balance, or seeming balance, between the orchestrated and the improvised.

Other strains appear, deviating from the numerical recitation (though that never vanishes): simple songs, perhaps nursery rhymes, and an increased density of sound including a prominent, fairly regular beating of a metal pipe. The crowd evenually reaches the 40-minute mark with cheers, whoops, applause, laughter and an eddy of conversation. They sound happy.

It's the type of event that, were I have to read a description, wouldn't likely have intrigued me. But I have to say, I found myself rather immersed in all the activity and enthusiasm, much like being in the flow of a busy street, purposive but chaotic. Maybe the progression from spare to richly complex is indicative of a way out of the aforementioned capitalist rut; there does seem to be a positiveness about the whole affair, in a way, not dissimilar to the worker songs that Cardew championed in the 70s. I couldn't help but feel that he would have smiled at all this, been drawn in and buoyed. I was too, a little bit to my surprise.