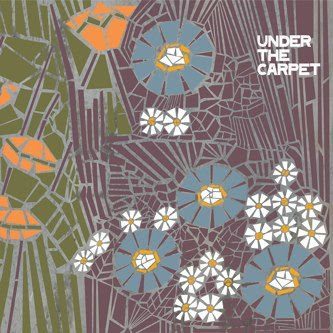 It's all too easy, as a listener or writer about this music, to pigeonhole a given musician into a slot based on what you've happened to have heard, forming a mental image that, in all likelihood, is seriously incomplete and inaccurate. My notion of what Stéphane Rives was about had been based on the handful of recordings, beginning with his stunning solo, "Fibres" (Potlatch) form a few years back: a rigorous exploration of the properties of the soprano saxophone considered as a sound-producing metal tube. There were elaborations on that, but they served to broaden that initial conception, to add fullness and detail.

Now, in fairness, Under the Carpet has all the appearance of a cooperative trio and, having never previously heard (I don't think) the music of Paed Conca (electric bass, clarinet) and Fadi Tabbal (electric guitar, ipad), it's possible that the music here simply conforms more to what they'd been doing all along, Rives (laptop--no actual soprano here, though I believe it's sampled and altered via the computer) adding his own ideas to the mix.

There are 21 tracks that pretty much segue into each other and the music covers a pretty decent range though, again, one I wouldn't have guessed for Rives. The modus operandi here is essentially improvising off of melodic fragments. Describing it? Well, there's a proggish element throughout; sometimes I hear hints of Terry Riley, sometimes of Godspeed You! Black Emperor; a quasi-industrial patch here, one referring to country blues there, a nod to Derek Bailey over here. I occasionally picked up glimmers of Hector Zazou or Benjamin Lew...quite the smorgasbord! There's generally a rhythmic element in place (often with a mid-East feel, natural enough given the music's origin in Beirut), more often a pulse than a beat, though the latter pops in once or twice. But the main factor is an inviting, almost gooey lushness, all of the sounds rounded and slippery, squelchy even. But these are usually tempered with harsher sonorities (via Rives?), allusions to 60s tape music, perhaps. Are there times when the sound gets a bit too proggy for my taste? Sure, once or twice the syrup is laid on rather thickly, the guitar too Rypdalian.

But overall, I find myself just enjoying the ride. It moves well, varies nicely and has a strong underlying musicality that carries it through. Really interesting work and, to its credit, really tough to pigeonhole. Check it out.