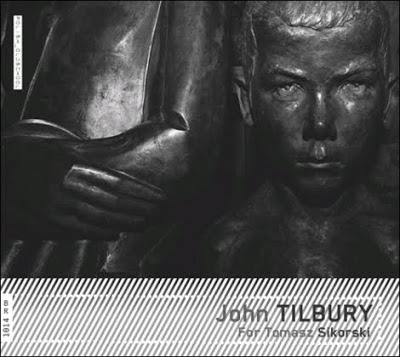 In the early 60s, Tilbury studied in Warsaw under Zbigniew Drzewieck during which he met the young composer Tomasz Sikorski (the disc sleeve says "Tomasz", the liner notes, "Tomek"; not sure if that's a salient difference in Polish), with whom he was very impressed and formed a fast, if temporary, firendship, the two not seeing each other again following Tilbury's return to England in 1965.

This recording presents three works by Sikorski from substantially later on, 1971, 1980 and 1984 as well as an improvised homage by Tilbury. There are vestiges of a minimalist approach in play but nothing, so far as I can discern, of a direct connection to any of the big four. Instead, the acknowledgement to repetitive forms seems to be buried in a moodier, darker music, a tolling kind of sound that often resides in the piano's lower register. I might go so far as to suggest that the music here has a good deal in common with Tilbury's own improvising at its further remove from the Feldman influence. One wonders if the influence on the younger pianist was substantial.

There's a bit of Feldman in the rolling, repeated patterns of "Rondo" (1984) but with a kind of lugubrious quality that the older composer doesn't have (that motif is one of the more striking figures herein). I found myself thinking of German Romantic painters like Arnold Boecklin, a modernist extension (and extreme deviation) from Rachmaninoff's great "Isle of the Dead". Not that it sounds akin, just containing a similar brooding, dark, troubled aspect. Otherwise, I can't think of much contemporaneous music to compare to this. Gurdjieff, maybe? I've listened to a bit of Sikorski's orchestra; music on-line and, generally, find it interesting and enjoyable though not utterly gripping. Glad to know it, though. It goes without saying that Tilbury's playing is rich and assured; I'd be curious to compare it to other pianistic interpretations.

It may also go without saying that the highlight of this disc is the concluding "Improvisation for Tomasz Sikorski", an absolutely gorgeous, probing 12+ minutes of Tilburyness that reminds me of portions of his playing on "Duos for Doris", high praise indeed. It's somber, dark in a way that matches the same quality in Sikorski's music (he was only 49 when he died; a sense of loss certainly pervades here). His ability to be both spare and supremely melodic has rarely been shown to better advantage. The touch, the choices made, the space encompassed--it's all here. Heartbreaking and profound. Must be heard.