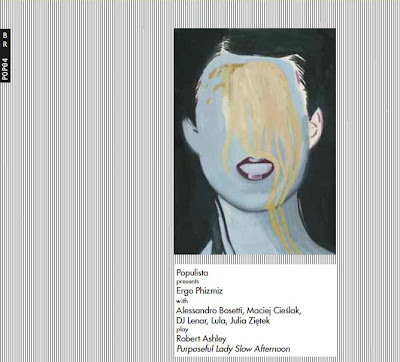 Were I mulling over a list of 20th century avant-classical works, choosing one to give a new rendition, I'm not sure Robert Ashley's powerful "Purposeful Lady Slow Afternoon" would have ranked so high. Not because it's an unworthy piece of music--it's not; it's an amazing, disturbing work, imho--but just the opposite, that it would seem to be a pointless thing to attempt. The original, with the chilling, impossibly detached reading by Cynthia Liddell, is so sui generis that any attempt at configuring it anew seems to be a fool's errand. Under the aegis of Mr Phizmiz on voice and piano (admittedly, it pains me type those letters), Alessandro Bosetti (laptop), Maciej Cieślak (guitar), Dj Lenar (turntable), Lula (voice) and Julia Ziętek (violin) make a stab at it.

it begins quite well and differently from the recorded version by Ahsley, with several minutes of high-pitched eerie strings and electronics. Then there's an oddity. Ashley's instructions, as I understand it [see response below--I was mistaken about this], were for the speaker to recount an experience, a sexual assault, that actually happened to her, striving to omit any moral judgments or overt emotionality, instead describing the sensations, tactile, auditory, etc. that she experienced. Here, Lula reads part of the original text in Polish-accented English. This immediately pushes the work back from its normal extreme closeness to the listener, back into the realm of repertoire where it becomes much safer, and blander. Phizmiz then intervenes with text from another source, not one involved with the subject at hand as near as I can tell, though it does rather engage in food pornography. Lula returns, back to the script, as before sounding as though taped in a small room. So it goes, back and forth. Phizmiz sounds a little like Derek Jarman in "Blue" but, again, far less moving or troubling.

And that's the problem. Considered purely as a piece of text/music, it's fine and had there not been an antecedent, one may have been more affected by the content. But knowing otherwise, it seems such a pale shadow of the original. Ashley's work is everything a David Lynch could ever want, a pure evocation of the terrifyingly normal of a horrid substratum of sexual domination. Here, it's been neutered and recast as a somewhat edgy art piece. The original is something I'd be very hesitant about playing for friends, for fear of its negative impact. This one would not present any problem. I have to consider it a failure then, in that sense. 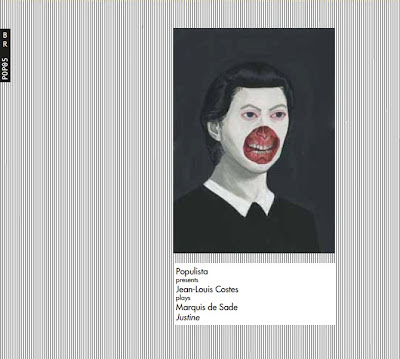 I'd never heard of Costes before now but a brief search revealed that he's considered by some to be the GG Allin of Europe. Photos depict as often bloodied. Ok, then.

A big caveat: There exists a loosely defined genre wherein a speaker declaims archly and histrionically, overdramatizing almost every word, adopting an extremely affected demeanor, adopting various voices from baby-like to pseudo-operatic to lunatic, etc., etc., few of which having much to do with how people actually live, talk and think but fit in perfectly with a kind of third-rate absurdist theater. I can't stand that stuff, just drives me up a wall. And Costes is about as perfect an encapsulation of that approach as I've heard in years.

So he reads from Sade's "Justine", in French-accented English sounding like Michael Palin intoning in franglais. I can't help but chuckle which I gather isn't the desired response. All solo voice with the odd hand-clap, usually spoken, sometimes sung, reading a text I guess Costes still finds transgressive which of course, it was when written and for sometime thereafter but, at least as acted out here, often sounds silly and daring only in an adolescent way. Shitting in Justine's mouth...yawn...I'd prefer to re-watch "The Aristocrats".

Hey, might be right up the alley of many; by all means have at it. Me, I'm hoping this before now excellent Populista series gets back on track....

"My instructions were simple: just describe a sequence of events, without any moral or psychological interpretation of those events, but include your sensory perceptual role in the events. The results were very bad. I heard amazing stories, but nobody could describe without explaining, even with me acting like a prosecuting attorney in the case of very close friends who normally would go along with such behavior.

Predictably, I guess, most of the stories turned out to be about sexual experiences. I learned that I did not know people who were secretly poker geniuses or secretly in touch with angels or secretly in on huge financial scams or robbing banks. (Of course, maybe they simply couldn't imagine such things or they simply didn't trust me.) I heard about a lot of sexual experiences, but they were always masked in rationalization. I did not get a single, pure "description." And so in order to compose the opera I had to compose a description, as best I could. (The plan for this short scene in the opera was that four descriptions would be heard in counterpoint.) I successfully completed one description-a sort of composite of some of the stories I had heard. I had ideas for descriptions of other kinds of experiences, but they were never realized. "

The full notes are pretty interesting to read.

damn, thanks Jessie. I was looking around for notes and found the first paragraph which still led me to believe that it was the narrator's story. Oh well.

That obviates some of my objections above though I'd still say that the reading here (possibly due to it's not being in the reader's first language?) suffers in comparison to the original.

dear Brian, never had a chance to exchange any thoughts with you but i hope you dont mind me doing this as a person involved in the productions you re reviewing. there s nothing on the critical level that i want to refer to but i love the review which make the statements (of everyone) even clearer. so i give myself liberty to make one tiny comment. i fully agree that this particular piece by Ashley is extremely hard to work with... actually - that was the main point and reason when i proposed it to Ergo. i find the piece to be really beyond music, beyond sound in a way, beyond document as well. i still dont know if i can understand what it really does to me - the way it is affective. and here s the point. what do you do to pieces such as this one? that s my main question... one option, that i think you approve is - leave them alone. fair enough. but another is.... well, you react to them somehow, anyways, no? so you try to react and approach it publically and break its integrity in this way or another. it s a result of this particular affect (forgive my unglish if this word is not the most adequate). there millions of ways to do that reaction and for me Populista is just about that - it s an open diary of dealing with the pieces which have knocked us down... none of the artists are trying to bring the same value again, none of them in a series follows the path.. so to make it short, as a kind of statement as promised, i d say there s only one thing i d like comment and give an enitrely different opinion: "The original is something I'd be vert hestitant about playing for friends, for fear of its negative impact. This one would not present any problem. I have to consider it a failure then, in that sense" Well, i d say the opposite; No, Ashley did that already. He did a piece that you dont want to play to the others (me too, btw). the point was to break it. We did sth else, coming from the piece, in a way we read it so if it is a failure, me personally, i d need a different reason - not because it does sth Ashley did but in a mild way. never was a purpose... cheers !

thanks, so much, Michael, appreciate it greatly.

purposes are always complicated and sometimes (not always!), learning them later on, cause me to re-evaluate my opinion. It's fascinating when that happens. When re-listening to this work, I'll keep that in mind.

Always pleasure to discuss these things! Thanks again, best