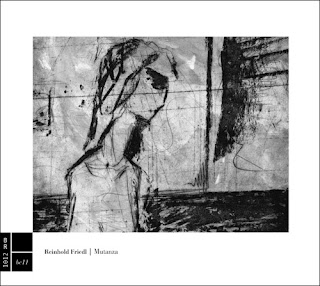 An utterly wonderful repertoire release by Friedl, concentrating on works that, in his mind, use the instrument in an unorthodox manner. First up is Helmut Lachenmann's "Guero", originally composed in 1969 and, inspired by the percussion instrument the guiro, consisting of sounds made by sliding one's fingernails over various portions of the piano exclusive of the strings. A 19784 revision added two plucked notes at the very end and they are delicious indeed, as is the rendition here, recorded at close enough range to amplify what was originally a very quiet piece. This is followed by Friedl's own "Epitaff" (1996) where an iron pipe is used as a bowing device on the strings resulting in incredible masses of sound, very "choir-like" as Friedl points out. Both of these works are quite sensual, setting the stage for what follows.

The wild card here is Glass' "Music in Fifths" (1969). Friedl justifies the inclusion in that the severe limitations Glass imposes on note range and lack of pedaling qualify as unorthodox".Listeners may disagree and, of course, Glass has fallen into some disfavor among any contemporary audiences (with good reason) but if, like me, you still derive a true thrill from his music up to (and including, in my case) "Einstein on the Beach", you'll love this reading and, moreover, it makes for a giddy waypoint during the course of the program.

But it's back into the churning maelstrom with "An American Dream", a 1974 work by Mario Bertoncini, a composer new to me. He developed a motorized wheel "made of gum" (I'm wondering if the term "gum" is a misleading translation) that generates tones analagous to bowing. The piece is rather monolithic, but impressive for its brief stay. Witold Szalonek's "Mutanza" (1972) begins with more delicacy, a plinking series of tones from the inside of the piano, small splashes and scurryings, before erupting into a more vigorous, agitated state. I many ways, this is the most "traditional" piece here, one that conforms more to other activity from the 60s in terms of general shape and inflection, possibly less satisfying because of that.

Nothing like a dose of Lucier to cure that and his "Music for Piano with Magnetic Strings" (1996) does the job. So pure and yet contain so much life and grit. Drone-based musicians can learn so much from Lucier, the master. Phill Niblock's "Pan Fried II" (2003) takes us out and returns us to the rich, thrumming zone glimpsed in the Friedl and Bertoncini scores. The technique is apparently realized with a plastic cord tied to a piano string, which is then "bowed with rosin-coated fingers" but, damn, you could have fooled me. I wouldn't have thought it possible, with that approach, to generate the canyon of sound as heard here. It's a beast and, as Partch said about his Blo-Boy, it does exactly one thing but that one thing it does superbly.

One of the most enjoyable albums I've heard this year. Hear it. 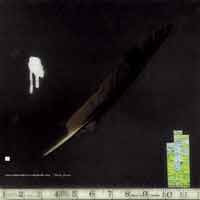 An LP release documenting portions of the trio's North American tour in late 2010. I caught their set at Littlefield in Brooklyn (which occurred roughly a week after the excerpts here) and recall it as being fine if not earthshaking, notable for being my first exposure to Crys Cole and having been impressed by her musicianship. As there are three dates listed here, from Winnipeg, Toronto and Montreal, I take it that Ambarchi has stitched together segments into a whole, or in any case, two sections separated by vinyl sides.

Cole played with great subtlety and reticence in Brooklyn and I'm assuming it's the case here as well, her contributions tinting the atmosphere limned on the one hand by Rowe's fairly rough-edged scrabbling and on the other by Ambarchi's more tonal washes, though when I heard them I was also impressed that the latter didn't play nearly as smoothly as I feared given my most recent exposure to releases under his own name (which, I should say, I like well enough, only that they seem to have drifted well away from where Rowe has found himself in recent years). So, one can pick up certain Rowe-isms and assign, perhaps, the more drone-like sound to Ambarchi, ceding Cole the remainder, if one chooses to parse things that way. Or you can just sit back and enjoy.

It's an interesting exercise to listen to Rowe when he's involved in a project that's not so conceptually important to him. Not at all to denigrate this trio, but it was more of an offer to tour with people he liked and he did so. Around the same time, he was working with Kjell Bjørgeengen on something that was far closer to his heart and which he simply approached differently. Here, it's a more relaxed affair, Rowe simply trying to fit in as best he can. This often results in a "smoother" flow as is the case here, though a dark one, like very strong coffee laced with some unidentified but potent liquor, It simply involves a different aim, an effort to evoke a more direct sensory experience than elsewhere, where much subsequent processing is often necessary, In that sense, it's e fine, satisfying set, kind of an update on the myriad recordings he did with Ambarchi early in the oughts, tougher and more cynical and with the refreshing presence of Cole, from whom I *still* would like to hear more.

Brian, you should try an LP of Bertoncini playing Brown's Four Systems, Cage's Cartridge Music and two versions of his own Cifre. Quite good. Edition RZ 1002 LP (1989)