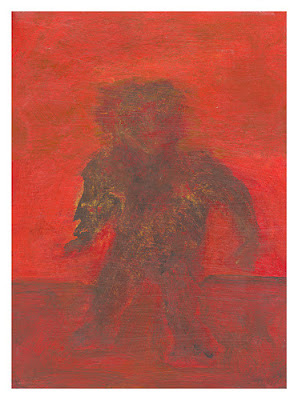 Said temperature reading comprising Tonino Taiuti (electric and acoustic guitars) and Vincenzo de Luce (trumpet and sounds) who present twelve vignetters in a style that's sometimes post-Bailey, sometimes more in the eai mold and sometimes refers to rock or blues. I wrote about their prior release, "Unknown Distances" (Audio Tong), last fall, enjoying it well enough and this one, while covering some different ares, ends up delivering about the same level of satisfaction. The first track refers not so obliquely to Fahey and the Delta blues tradition while, sliding sideways into abstraction; a very nice job, not so far from what one can imagine Fahey himself having done had he lived. The guitar s generally heard as such, often the trumpet as well. This sets up a difficult problem, to negotiate some potentially well-worn avenues and not sound derivative. One obvious "route" around this obstacle is to simply play what you truly feel instead of trying to do something and I get the sense that this pair manages that on occasion, as on the lovely "Dead Flowers" where there may be echoes of Bailey and Wheeler but not so many as to distract from a moving performance. There are several of those nuggets to be found here where they find a good balance between the nostalgic and the harsh again, not so dissimilar to what Fahey was investigating in the mid 90s, including several throbbing, bluesy rhythmic figures. (I've no idea if that's a recognized reference for these fellows). Other pieces either don't quite gel or can be heard as palate cleaners between more successful attempts. This disc grew on me a good deal at each subsequent listen; good work. 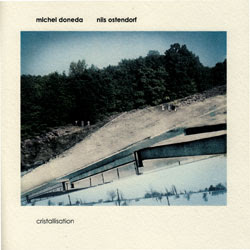 I don't think I've heard trumpeter Ostendorf before but he sounds like an ideal partner for Doneda who, along with Martin Kuchen, wields the greasiest, dirtiest high reeds in this end of the improv spectrum. That said, in recent years, I've been less enamored of Doneda than I had been upon first hearing him in the late 90s; he tends to be more more gestural and out front than I'm comfortable with though, as with Kuchen, when he really digs deep, really lets go, there's solid music to be found. But here...well, there's exactly what you might expect: hollow, air-sheathed sounds from both horns, a tendency toward the pinched and shrill, long, smeared tones. I have more the impression of effects than conception, in a nutshell and effects that, however well played--and they are--don't amount to something deeper. Even when, as is often thee case, the quieter tracks allow for more space and reflection (and work better), there's still a constancy of sound, a seeming reluctance to pause and listen. The result is the kind of improv recording that still, even if tangentially, has roots in a more efi-oriented formulation. All well and good and listeners with that bent can doubtless find much to appreciate here. To my ears, there's a bit too much of both aridity and over-activity.