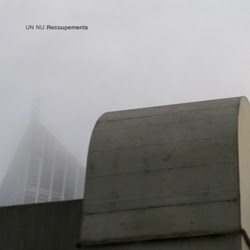 A strong recording from Pascal Battus (guitar pickups) and Benjamin Duboc (double bass). Without know precisely what sort of sounds Battus was likely to elicit from that particular source, I already liked the idea of any (presumably) shrill and whiny electronics in tandem with a deeply sounded bass, which turns out to be what occurs here a good portion of the time. Duboc uses the bow quite often, usually in the quieter, darker reaches of his instrument (though quite forcefully) while Battus extracts a wide range of higher, drier, screechier, squelchier sounds from his mere pickup; hard to imagine that this was the sole source, in fact. Be that as it may, the single track, running about 52 minutes, breathes very well, moves from its somberness on occasion, is smooth and humming here, awkward and tumbling there, including intimations of traditional rhythm and melody, but just the faintest tinge. The more agitated portions don't sound overbearing; there's always a sense of listening and consideration for placement, even then where many would be sawing away without regard for anything but their projection. Here, when this arco display occurs, it's marvelous on its own and is then brilliantly enhanced by a slowly emerging, grinding, metallic scrim from Battus; the point of intersection between these two sounds is extremely delicious. It meanders a bit much, maybe, about 2/3 of the way through, but overall a tough, gritty performance, featuring unusual sonics, well achieved and worth checking out. 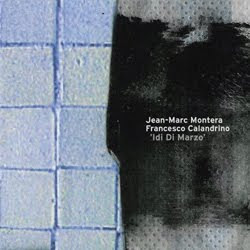 I first heard Montera at Victoriaville in 1999 and was rather put off by the overt showmanship in his performance, the rock-star aspect that seemed entirely out of place. In the ensuing years, on the few occasions I've come across his work on dis, I've had pretty much the same reaction, perhaps unfairly influenced by that earlier encounter, who knows? Here, the guitarist is in the company of Francesco Calandrino (lo-fi stereo, manipulated cassettes, field recordings, clarinet) and...I still have the same response. It's not all as in your face as I've previously experienced--though there's enough of that, to be sure. It gets spacier, but always jam-paked, always rich to the point, and past, of surfeit and, crucially, almost always entirely ignorable. Very odd, in this sense, that it's fundamental smoothness allows it to virtually pass unnoticed, nothing for me to grasp a hold of, like a torrent of cake icing. Granted, as said, I may not be coming at this as objectively as I might, but there's little here of interest to these ears.