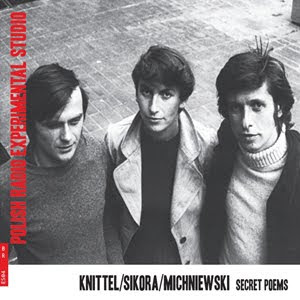 KEW, as the trio comprised of the above members was known, formed in 1974. The three were students at the Fryderyk Chopin HIgher State School of Music in Warsaw and had pursued studies in electronic music as well as other forms. This 3-CD set includes three pieces by the trio as such, though the bulk is given over to solo creations, on by Michniewski appended to the trio performances and a single cd each for works by Knittel and Sikora.

I think it's fair to say (and not only because of the similarity in group names) that if one imagines an MEV coming out of the 60s tape collage aesthetic, you wouldn't be far off from the trio music here (all from the mid 70s), though with more of a sense of quiet and subtle referrals to tonal music. "In the Tatra Mountains" indeed begins with a composition of the same name by Wladyslaw Zelenski, very romantic in nature, which is then subject to various indignities. All three pieces evince a fine dynamic flow, muscle and grace interweaving as do electronic and acoustic elements, notably in "The Zones of Adherence" which contains enchanting and vigorous inside-piano activity, subtly enhanced with electronics. The group seems to have ceased activity as such by the end of the 70s (aside from a reuniting for a re-recording in 1993) which is a shame; I would have loved to have heard this music expanded upon.

Michniewski's "Whisperetto" (1973) is scored for six vocalists, reading/singing/ululating texts involving stereotypical women's issues. In performance, they're on different sides of the audience, illuminating their libretti with lights when making sounds, dark when not. Additionally, a bodybuilder flexed his wares on stage in rough accompaniment to the readings. Lacking the visual stimuli, it's reminiscent of a weaker variation on some of Penderecki's vocal compositions of the previous decade.

Knittel's work has great range, often incorporating "natural" sounds (or transformation thereof) alongside electronics, including speech, older music, a jazz combo, much more. At its strongest, on works like "norcet", he achieves a plasticity that's entirely convincing, a real palpable sense of organic presence, kind of a musical analog to a Frank Stella painted sculpture (or a Chamberlain deconstructed car). Again, that tape music sound is prevalent and that's something I'm always just a bit put off by, something too pat about it, but given that, the music is bracing, often scouring stuff. I'd love to be in a space with these lines zipping about me on well-placed speakers, slicing through the air, piercing. It's really good work and Knittel's yet another Polish musician I'm very grateful to have been exposed to.

And Sikora is even better. While she was quite capable of the spectacular (the opening homage to Pierre Schaeffer is sock-knock-offingly good (!!)), she's also far ore subtle, more sensitive, I think, to purely aural qualities, to the placement of sounds that makes one giddy in their adjacency. "View from the Window", which Zeitkratzer "covered" in their Bôłt release is just gorgeous, a wondrous journey "through hollow lands". A piece like "The Head of Orpheus" begins sapcily enough to be worrisome but gradually coalesces and ends with enormous, eviscerating brutality. I want to hear a great deal more of her work.

Once again, Bôłt performs the invaluable service of bringing to light music from Poland that many (including this listener) never even knoew existed, much to our (my) discredit. DO yourselves a favor and check it out. 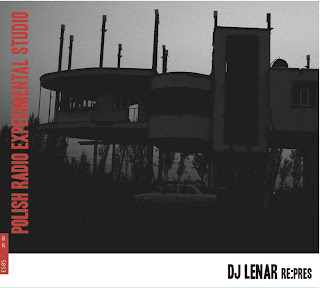 Eugeniusz Rudnik is a Polish electronics composer, one of a number to have created work at PRES (Polish Radio Experimental Studio). LIstening to some of his work via YouTube (a good amount is available there), I have the impression of a vital composer, very much of the time (60s, by and large) whose work reflects that of other concurrent tape collage composers but also contains aspects and approaches that sound, to me, unique and interesting; I'm curious to hear his work in greater depth. (Two of his pieces appear on the PRES Revisited album on this same label).

Rudnik apparently conceived a huge number of quite short works, some of which have been exhumed and reconfigured here by DJ Lenar. As I'm at the disadvantage of not knowing the sources or to what extent they've been transmogrified, I'll simply give impressions of the pieces as heard. The tracks are brief (17 over the space of about 31 minutes). They're both redolent of their time and, I suspect, outside it, the former in the sense of tonality and timbre where that "tape sound" is often present, the latter in what I'm guessing is the addition of repetitive and looped elements. Still, there's good variety here however it was arrived at, spacey, cool bits abutting jagged ones with free guitar and piano blenderized, slowed, otherwise warped. Other portions edge toward a gloopy Hancock/Headhunters vibe (not unpleasantly) only to fragment into disparate shards. Almost inevitably, I thought of Raaijmakers now and then though there's a certain faint smoothness in effect here that gnaws at me, something you don't hear in Raaijmakers' work. Still, I enjoyed the disc overall, both on its own and for prodding me to seek out original work by Rudnick.
Posted by Brian Olewnick at 8/05/2012 08:51:00 AM