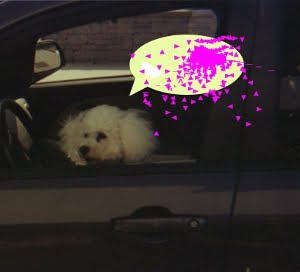 Richard Kamerman - None for the Money (Copy for Your Records)

Kamerman's an amusing fellow though (apart from the name of his label) I don't think that side of him has shown so overtly before in the musical arena. "None for the Money" is in three sections, the first a suite of six pieces titled, "Twenty-Four Sycamores". The sounds employed aren't so far from what we've heard from Kamerman before--crinkly electronics, exposed circuitry, what-have-you--but there's something warmly comical about the way they're arrayed here, in repeating patterns, cavorting around happily and lightly. "Tau Pukka Patellae" (which sounds like an unusually oriented fraternity to me) abstracts things a bit further, using two channel of somewhat differing electronics, not exactly repetitive but, with their flow of liquid, bleeping tones, feeling as though there's an orbiting aspect in effect. It goes on for quite some time, however (23 minutes +), and I can imagine some listeners losing patience with the sameness, others losing themselves in the flux; me? I went back and forth on it.

"Again, Before the Sun Ryes" is the kicker. We hear a woman (I've no idea who) singing, "A Good Man Is Hard to Find", accompanied by strummed guitar and accordion, the ditty gradually encroached upon by hissing electronics soon followed by a full-on squall, quite invigorating. The disc closes with a brief, darkly woolly piece, like a close-up recording of crumpled fabric.

A fun recording, relatively accessible as these things go, well worth hearing. 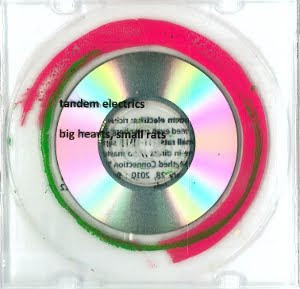 A chewy, altogether delish, 16-minute nugget from Kamerman and Reed Evan Rosenberg. As above, things commence with music from elsewhere, her a muted playback of a slow-paced, gospel/funk (?) track that's extremely lulling and lovely (curious to know what it is) that pours out smoothly before, perhaps inevitably, being torn to shreds by moments of feedback that will send spouses and pets filing for orders of separation. The music vaults between extremes for much of the track but there's a ton of detail in the harshness and one never has the sense of gratuitous noise; there's an emergent sense of structure here that I find quite wonderful, something that's appeared on occasion before with this pair, both live and on recording. It's a very cool thing--maybe 2/3 of the way through, the previous 10 minutes suddenly make great sense and the subsequent five or six seem absolutely appropriate. The 16 minutes just hurtles by; I was consistently surprised when the piece ends. Really good work, the best I've heard yet from them. 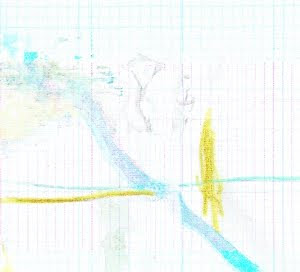 Ferran Fages - Life Best Under Your Seat (Copy for Your Records)

I admit it took me an unreasonable length of time to get the pun in the title...

I also have to say that I'm unable to listen to this disc, which I nonetheless greatly enjoy, in the way that Fages suggests, repositioning ones speakers so they're facing walls, ceilings, etc. ; the orientation of mine doesn't allow such casual manipulation! I never, though, use headphones, so I'm at least able to follow that instruction.

What we have are subtle, often quite soft layers of electronics--some sine waves, others form computers and contact mics. Nothing terribly new but, as he's shown in the past in a variety of "languages", Fages has a very thoughtful musical way of organizing sounds that quite appeals to me. I can imagine the sounds muffled by adjoining walls and by playing the recording at low volume level can possibly approximate this effect, the majority being a soft tinging of the atmosphere with the occasional glimmer provided when the dynamics rise and sharpen. It's quite lovely in and of itself and would certainly be a fine cloud to walk through in an installation environment.

Yet another fine addition to the Fages catalog.