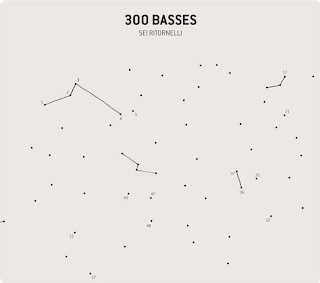 I admit to being predisposed to like an ensemble called "300 Basses" consisting of a trio of accordionists. Or, to paraphrase, Homer, "Accordions! Is there nothing they can't do?" Alfredo Costa Monteiro, Jonas Kocher and Luca Venitucci, supplementing their squeezeboxes with objects, open with a low, information-packed hum, quivering and prickly, one that fades in and out like troubled breathing, before slowly exploding into a needle-filled wheeze that's both harrowing nd absorbing, all dry, keening scrapes. I get the impression hat some forethought was applied in the generation of the six pieces (though no compositional credit is provided), the next track consisting of a different sort of high-pitched, pained throb, also extremely rich with detail and admitting of much more substance than one can discern on a single hearing. "Gira Bile" can almost be read in a free jazz context with two of the accordionists providing a droning (superbly so) backdrop whilst another "solos" atop, his sounds having an air and vernacular of blown reeds; I was picturing a primo Brotzmann performance....on accordion. It works. Throughout, there's more a sense of the sere than deep mellowness, the latter used sparingly as a color. Each of the "ritornelles" (choruses, I'm informed) is strong and captivating. If there are still listeners around who balk at accordions (difficult for me to imagine!), do check it out. Everyone else as well--a very fine recording. 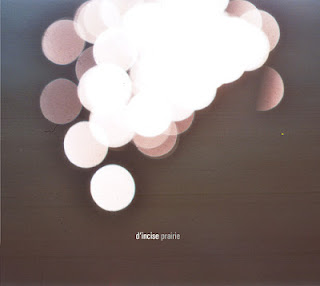 Swiss-based Peter Laurent (d'incise) offers four lengthy works on this double-disc set, centered around drones and the audible elevation of small sounds. These range from vibrating drum skins to the amplification of "quiet parts" from past concerts (an idea I rather like). This latter is my favorite piece here, yielding a varied rnge of not-overtly-related sounds and textures that possess a very full feeling, elements jostling around in space, buffeting each other, sliding past one another, chaotic but of a whole. In the notes tot he release, he writes, "When it gets boring it becomes interesting" and d'incise abuts that subjective divide now and then. All the tracks are listenable though at times, my attention wandered,which is perhaps fine. I'm guessing that they'd function quite well as traditional (that is, Eno-oriented) ambient music in the sense of subtly causing one to think differently. Hard to say. Listening to the final piece, assembled from "feedbacks, open piano, magnetic glitches, pre-amps, laptop and house noises", one realizes that there's a hell of a lot occurring beneath the apparently simple hum though attempting to focus on it, like looking directly at a faint star in the night sky, often causes the cohesion to disappear. Very interesting work, especially the second disc. Worth checking out for those inclined in this direction.

"to paraphrase, Homer, "Accordions! Is there nothing they can't do?""
"If there are still listeners around who balk at accordions (difficult for me to imagine!)"

pfff making such a main point of accordions presence - what a complete nonsense.
of course everyone likes accordions and amazing Anzellotti stuff, check him out if you didn't yet dude

Yes, I know and enjoy Anzellotti and dozens of other accordionists (including many non-Western ones) and always. But you may be surprised at how pervasive the dislike for the instrument remains among many otherwise aware listeners. Almost as strong as the horror of bagpipes, which I can also not understand. Dude.