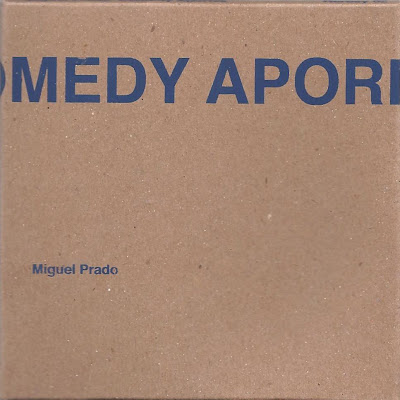 Richard has already beaten me to the punch on this one and made many excellent points, so I'll try to confine myself to a couple of issues.

To recap, "Comedy Apories" is a composition that refers directly to a general mode of operation (to grossly simplify) that has been part and parcel of the Wandelweiser group of composers for the last couple of decades. Prado makes this explicit in his notes:"...isolated events, arranged in time as a 'Wandelweiser Detournement [diversion]'". He chose as his material another kind of multi-layered allusion: laughter, that of the canned variety. He takes the scoffing laughter many experimental artists know too well and transmutes it to the awful, phony sounding laughter of the situation comedy. As Richard mentions, this is quite the loaded sound.

The recording is silent for the first five minutes, the initial peals, loud and unpleasant, coming as something of a shock. This sole element, the same two-second grab continues to appear, bracketed by irregular, relatively lengthy periods of silence (which, of course, is another element) over the course of some 37 minutes.

The choice of the laughter recording is the salient thing, naturally, and is (for this listener) almost impossible to hear without bringing along all its connotations, predominantly negative (as opposed to natural laughter. Interestingly, I received this disc just after playing that Scott Johnson track made up of sampled giggles--a very different feel there.) Try as I might--and I did--it's very difficult to hear these sounds in an abstract, Cageian manner and, I suspect, Prado would like us not to do so. But that's just the thing: once the idea is understood and more or less appreciated, does the performance bear further listening? In a random excellent Wandelweiser work, say a Pisaro piece, there's great care taken in what I'd call the poetics of the composition. The duration of the silences is arrived at intuitively, with a sense of shape, of cadence, of weight. As well, the sounds introduced, even to the extent left up to the performer, are (usually) inherently interesting, either on their own or in relation to the context in which they appear or, in a particularly successful piece, both, leading to a very complex cross-referential interplay between sound and structure. These "poetics" are quite subjective and one's enjoyment perhaps depends on the affinities one shares with the judgment of the composer.

In "Comedy Apories", I'm left with two problems after the initial appreciation of the idea, which I do indeed appreciate, even to the extent that it's a gentle poke at these aesthetics. Firstly, as mentioned, the sound, while actually rather complex in and of itself, by virtue of simply repeating (I sometimes thought I detected adjustments in dynamics and contrast, but I'm not sure) becomes heard as rote after a brief while, leaving only the spacing as an object of real interest. Second, for me that spacing came across as rather arbitrary, somehow not evocative of anything else. I use that term, "evocative", hesitantly knowing I may be assigning values to a group of composers which they reject but I often can't but help picking up a certain emotional quality in the music, as in the Frey piece I heard the other night. Often it's quite attenuated but I still sense those wisps.

All of which isn't to say that this isn't a valuable and intriguing work--it is. It's just not one I'd find it necessary to listen to often again as I do with music by those to whom it refers. The idea is fine, though, and that's enough. I just don't know that more will be revealed on further actual listening as opposed to rumination. I could, of course, be wrong.

Do you know any good magazine or monthly/quarterly publication (paper) that covers these kind of release (improv/electro-acoustic/avant-jazz, conceptual, etc) ?

I only know some classical music publications and they too rarely review contemporary music ; and as for The Wire and Signal To Noise, I think they tend to focus too much on current trends.

(BTW: Great job on reviewing all these titles ! You made me discover a great number of interesting artists this year)

Thanks for the kind words.

No, I'm afraid I don't really know any print publication that covers it routinely and well. I stopped reading WIRE about five years ago myself, finding I could get better info on-line.