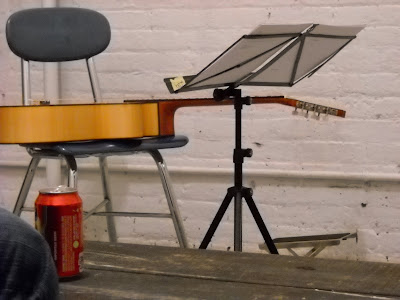 I visited the Presents Gallery in Brooklyn for the second time last evening (now with benches!), once again for a performance centering around the Wandelweiser aesthetic (part of a series being curated by John P. Hastings). On this occasion, the night was programmed by Jason Brogan who presented works by Eva-Maria Houben, Jürg Frey and himself (the latter incorporating a text by Beckett). I'm assuming that at least two commonalities among the pieces were a reason for their inclusion: first, each had a kind of "call and response" aspect in that the sounds made by the two instrumentalists (and the speaker in one) virtually never overlapped and were equally apportioned, in a regular sequence. Second, the musical material, sparse though it was, always retained a melodic, even emotive character.

Houben's "rufe" (2010) was performed by Brogan (acoustic guitar) and Nathan Koci (accordion). Each musician, alternately, played between (as I recall) two and five notes, very quietly, followed by relatively brief--no more than ten seconds--silences. Then the other would play. Back and forth. The fragments were clear and clean and almost seemed carved out of some larger melody, kind of analogous to solarizing a b&w photo to an extreme degree, reducing it to a few marks of black on white yet still retaining some essence of the image. Another picture that came to mind was a sidelong view of a badminton match in hyper-slow motion, each swat occupying generally similar terrain but varying slightly from one another, as did these selections of notes. As he did again on the final piece, Koci often drew forth his sounds from very soft to...slightly less soft; there must be a term for this apart from crescendo as that seems entirely inappropriate to music this quiet. Doing so, he imparted a subtle but welcome romantic tinge to the music. And at about 15 minutes, the piece was of perfect duration.

This was followed by Frey's "Exact Dimension without Insistence" (1999), again with Brogan on guitar and Koci, who switched to cornet with mute. As with the Houben work, we heard each musician in discreet segments. Brogan's contributions, if I'm not mistaken, were single notes, low and soft, while Koci, more often than not, played a plaintive two note phrase, twice on each pass, though I think there was a three-note passage near the beginning and, at the conclusion, this sequence was played four times instead of twice. [the score--I believe complete--can be seen here in a photo by Yuko Zama from the Rowe/Malfatti sessions in Vienna this last November where they recorded the same composition. You can make out the timed sequences though the trombone part appears to be three of the same notes, not what I heard yesterday. Perhaps there's more to the score or some liberties were taken.] The silences between these essentially identical portions varied a good bit, sometimes upwards of a minute and, in a way, became the substance of the piece, the frames that acquired interest in and of themselves. Yet that poignant melodic fragment, often augmented by Koci's blurring of its edges, and the single, doleful guitar note, almost a death knell, at the same time lent quite a bit of emotional weight to the work, a surprising amount given the "paucity" of material. The music also had an openness that, to my ears, welcomed the ambient sounds, most noticeably the clicking arising from the heat pipes and the soft roar of the Brooklyn-Queens Expressway a half-block distant. Lovely work.

Finally, we had Brogan's, "two instruments" (2010), melded with a reading of Samuel Beckett's "Enough" (1965) by Jessie Marino. Once more, the structure was simple, elegant and discrete. Marino read the piece one paragraph at a time (very well, in a steady, calm voice). When she finished a section, the pair (Koci back on accordion) played an eight-note pattern, a single note at a time, alternating. This was the one instance where there was the slightest overlap as Brogan allowed his note to sustain and Koci, often, began his while the guitar tone still lingered. Back and forth. Again, the effect was quietly beautiful; I was, oddly, reminded of a very pared down Harry Partch, like "The Letter" reduced to its essence. The text (which I'd not previously encountered) is rather more narrative, and even romantic, than your standard Beckett, recounting a love affair from the woman's vantage, a relationship beset by troubles and oddities but lined with love and friendship. It was tempting to hear the music as commenting on the story and on one or two occasions the sequence seemed to decidedly nod that way, the notes forming a clear, sad melody (Koci smiled wryly during one such, perhaps thinking they'd veered too near the obvious, but it was touching).

Three fine, thoughtful works, then. The site would only hold about 20 with any degree of comfort--there were about a dozen yesterday--but more folk should check out the series.