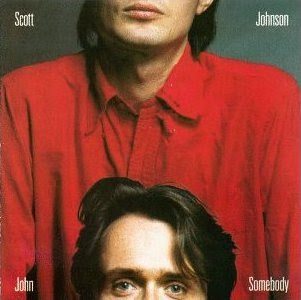 I had every intention, before re-listening to this, to write something about how a given recording can, at one point in one's mature life, strike one as spectacular and entirely cool only to be heard with chagrin ten or twenty years later. In my head, Johnson had taken this rather interesting idea and embedded it in fussy, post-fusion pyrotechnics.

But I'll be damned if this doesn't still sound pretty ok!

Not sure how well known or remembered nowadays but it made a decent enough splash at the time, released in 1986 on the Nonesuch subdivision, Icon, produced by Yale Evelev. Johnson had taken found conversation, the initial snatch consisting of a young woman saying, "You know who's in New York? Remember that guy...J-John Somebody? He was a, he was sort of a". Johnson then breaks down the phrase into both rhythmic and melodic cells and fashions an intricate and, yes, often overblown electric guitar accompaniment (assisted by Bill Ruyle on percussion and current SNL bandleader Lenny Pickett on reeds). The piece has a wonderful buoyancy, though, that allows it, at least in part, to transcend the fussiness, as though this gambit was so entirely new (I'm not sure that it wasn't) as to obviate any concern about the quality of actual music to which it was wed.

Johnson pushes the limits a bit with "Involuntary Songs" (lovely title) consisting of tape-scraps of female laughter, organized in quasi-Reichian fashion so as to give more the impression of burps than tee-hees. Still, it's rather fun; nothing too substantial but a piece that would make a perfectly enjoyable cable TV soundtrack. Faint praise, yes, but something. Part two of the piece nods to the Ramayana Monkey Chant in, necessarily, humorous fashion though the guitar becomes almost unbearably overwrought before the "John Somebody" theme returns. The concluding "No Memory" comes across as Mantler circa "Hapless Child" on an off-day when he couldn't restrain Rypdal.

But, I have to confess, reasonable fun most of the time. I picked up his soundtrack to the fine Paul Schrader film, "Patty Hearst" in CD era but that's the last I've heard of his work as near as I can remember (maybe something at a BOAC fest?). I see him around often in the audience at various downtown gigs; no idea what he's up to though.

Heh, didn't realize this had been re-released, with additional material, on Tzadik, also bearing an updated cover image: 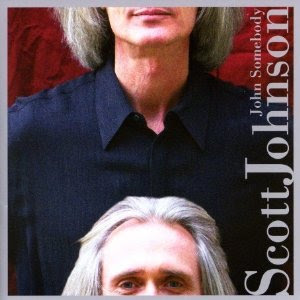 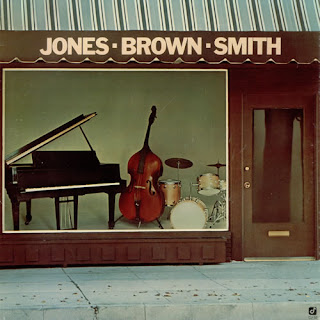 Closing out the J's with one that, in my collection, stands out rather oddly, not the sort of thing I normally bought and, in fact, I've no idea how I came upon this or why I picked it up.

And, truth to tell, it's not very good, just exceedingly bland. Eight standards, played in decent cocktail lounge style, Jones unfortunately using a Fender Rhodes on several tracks. I don't know Jones' work very well at all though I know I've heard some far better things than this. For all I know, there are Jones fans who hold this album in high esteem, but I can't hear it. Recorded in 1977, it's entirely time-warped already. Jimmy Smith's drums especially sounded eerily like electric organ rhythm stops.

(Guessing perhaps I bought it because I'd recently gotten the amazing Ellington/Brown collaboration, "This One's for Blanton". If so, Ray done me wrong...)
Posted by Brian Olewnick at 2/15/2011 07:54:00 PM

John Somebody was the first cd I bought and I played it quite a bit. I'm glad to hear it's held up so well because I remember thinking it was an interesting concept executed effectively. But it wasn't for everybody; I remember playing it for some idiot who kept trying to figure out if the spoken line came from Annie Hall as I was shooting eye death lasers and thinking "Please STFU" very loudly. Patty Hearst was pretty "meh" by comparison.

One hit wonder. Have you ever played it for your listening group?