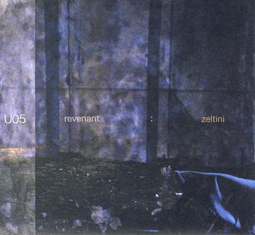 Revenant (I can't help but think of some especially powerful and frightening figures from Doom) on this occasion, November 2008 in Latvia, consisted of Maksims Shentelevs, Eamon Sprod, John Grzinich, kaspars Kalninsh and Felicity Mangan (though Grzinich writes: "‘revenant’ is an ongoing project with open membership"). No instrumentation is mentioned and, further, there's a notation on the sleeve stating, "Final piece edited from 4 synchronized binaural recordings".

Perhaps it's the cover imagery, maybe the former-SSR setting, but it's quite tempting to hear this dark, brooding music as inhabiting a Stalker-like environment. There's an oppressiveness, a dank aspect wherein one thinks of cold, clammy surfaces, algae-covered wall, ancient heavy machinery. The two overriding sounds areas are a blurred, metallic kind of drone, as though there's a sputtering engine at work somewhere down the dark corridor and the clanking of light metal objects, linked like chains, skittering across the foreground. Small rhythms emerge: soft-mallet taps with a vaguely gamelan feel, as though at least one of the devices lying around still functions. Some faint voices then, rather surprisingly, a jew's harp, strumming away in a loose rhythm, verging on a melodic fragment, a hapless fellow traveler in the sewers. This continues for the final 10+ minutes of the work, some increasingly violent clatter alongside, until the sounds skid to a conclusion among the chirps of mechanical beetles and sloshing water.

The work is almost static, in a sense, minor events drifting in and out of focus; again, one thinks of the lengthy water-covered floor shot of Tarkovsky, though the focus here isn't quite so sharp. 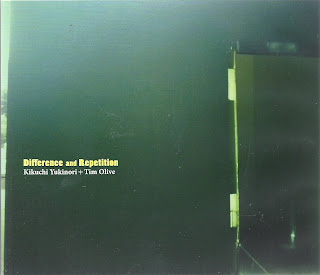 Seven tracks of fairly harsh, knifing electronics that, at its best, provides some...enjoyable lacerations. The brief opening track, for instance, ends with piercing keens, like metal scraped with metal, but very high, extremely sharp. the second offers respite, with (enticingly) awkward, low rumbles. Yukinori, who I don't believe I've previously heard, and Olive work together seamlessly enough; no instrumentation is provided (I assume a combination of laptop and open electronics) but the music comes across as of a piece in any case. My preference is on those marginally quieter cuts, 2, 4 & 6 here, where the pair stretches things well, allows the crackles 'n' hums some space and gives more of an impression of letting things ambulate on their own rather than directly controlling them--quite probably not what was actually happening, but that's the sense I get. On the others--to these ears, it's a tough trick to pull off. Duos like English and Tandem Electrics can handle it (usually) but that tightrope between awkwardness and awkwardness is a tricky one. On the last piece, however, they do (inadvertently?) edge close to what I might have guessed was some extreme Keiji Haino. All in all, a good tough recording, this one, and certainly worth a hearing for fans of the above-mentioned.