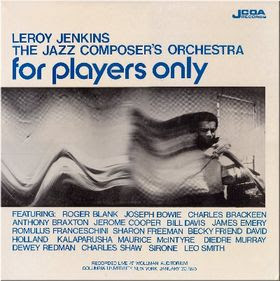 The New Music Distribution Service, in the 70s, used to send out a wonderful mail-order catalog, a handsome set of stapled 8 1/2 x 11" pages, grouped by label, with b&w photos of the album covers and a brief description for each. I think it was in one of those, announcing the availability of this recording, wherein the diminutive Leroy Jenkins was referred to as: "Pound for pound, the greatest living violinist". Always brought a chuckle. He's always been, without doubt, my favorite jazz violinist.

I believe this is the first recording under Jenkins' name (1975), not yet released to disc to the best of my knowledge. In truth, it's an unwieldy creature. The ensemble is impressive, eighteen musicians including Braxton, Kalaparusha, Redman, Leo Smith, Holland, cooper, Sirone. But the structure is odd to the point of messiness. Part 1, Side one of the LP, is some 16 minutes of heads and group solos. With the exception of a lovely pastoral section midway through and an elegiac concluding passage, the written parts are blocky, constrained and altogether uninteresting. And the improvisations aren't much better. One has the impression that Jenkins was a bit overwhelmed by the scale of the endeavor and simply strung together five or six sequences, most of them not so inspired. I should note, however, that the final portion, with Smith soloing over (I think) Diedre Murray is outstanding.

Side B is even odder: following the conclusion of Part 1 (with some nice mesette work by Redman and a contrabass clarinet/tuba (Bill Davis) workout, there's a string of eighteen solos, each lasting about 30 seconds. Sometimes, you get the impression the player has consciously striven to engage with what came just before, more often, they seem unrelated, despite some overlapping. Not to say there aren't nice little nubbins of improv there--there are a few: Roger Blank's and Jerome Cooper's balifon breaks, Becky Friend's flute, Murray and Jenkins' concluding solo stand out. But overall, it's an unsatisfying construct, very awkward. 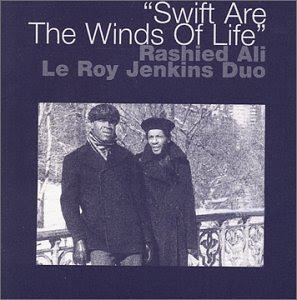 You know, I'd never before noticed the "Le Roy" on the cover....

September, 1975, originally released on Survival Records (since reissued to disk by Knitting Factory) with liner notes by...Stanley Crouch. And good ones at that. Young 'uns may find it difficult to believe, but there was a time when Crouch was a pretty damned good writer, and not half-bad drummer either. In any case, a wonderful recording, full of those "winds of life", Jenkins soaring, Ali in a crisp, Roach-like mode, very much into the melodic aspects of his drums. Excellent when running full bore but even better when, as on the title track, Jenkins veers into the most plaintive blues playing the post-Coltrane avant garde ever knew. 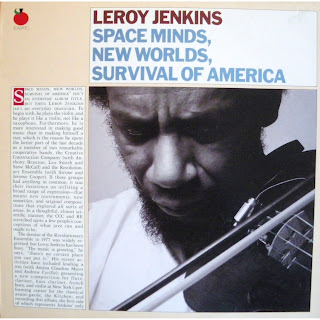 iirc, the first release on the Tomato label was Glass' "Einstein on the Beach" (I could be wrong) and their catalog went on to include Cage, Partch, Sam Rivers, Townes van Zandt and others. The art design (and sometimes actual illustrations) were by Milton Glaser, yielding covers that were always quite handsome. This one's from 1979, with a quintet of Jenkins, Cyrille, Anthony Davis, George Lewis and Teitelbaum on Side A, a quartet (the same, minus Teitelbaum on Side B.

Post Revolutionary Ensemble, Jenkins seemed to flit back and forth between two unpromising poles: the bland, creaky jazz rock of Sting! [sic] and the kind of stiff, modern classical compositions that evoked the most arid music of Muhal and Mitchell. "Space Minds" is a mixed bag, pointing down that latter, dismal path but still retaining some fire and including one glorious piece.

Side A is a six-part suite that's less clunky than "For Players Only" and is deftly performed, though still a ways from primo RE work. I get the impression he followed Anthony Davis' work very closely, or perhaps vice versa, as I think the first Episteme album came out about a year after this. Some nice passages, including the final one that portends more to come, but a lack of thoroughgoing purpose, at least to my ears.

The second side, with four individual pieces works far better. "Dancing on a Melody" recalls Jenkins' acerbically bluesy RE lines, he and Lewis wafting above piano and drums like leaves in the wind. "The Clown" (unfortunate title) tumbles along with vigor, Lewis again in good form while "Kick Back Stomp" does nothing of the kind, instead loosely ambling hither and yon, never quite making a statement of one sort or another. But that's all swiftly forgotten when we reach, "Through the Ages, Jehovah". One melodic line, that's all, repeated a few times over three minutes, but what an incredibly beautiful line it is. Only tinged with the gospel implied by the title, it's really pure Jenkins at his best, recalling "New York" from "People's Republic". Heartbreaking;y gorgeous, stated simply
Posted by Brian Olewnick at 2/13/2011 12:34:00 PM