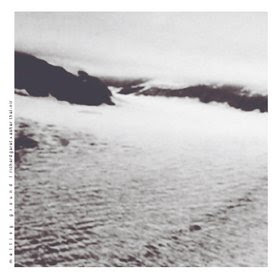 I saw this video back in August of 2008 and wrote about it then--it's very welcome to have it back now and to be able to view it multiple times at leisure. To recap, Garet shot flickering b&w footage from a helicopter of the Mendenhall Glacier in Alaska. It's an uninterrupted shot, some 40 minutes long. The camera's gaze replicates that of a calm but extremely interested observer, not blankly staring but occasionally panning to areas of extra interest, slowly, generally keeping the horizon line near the top of the frame, often outside it completely. One easily slips into the mindset of this observer, ceding control. The flicker is most pronounced in the lighter regions and, as there's enhanced contrast in place much of the time, that flicker becomes a major element (though it's not something I recall dwelling on when I first saw it, oddly). Asher's music is piano-sourced, the mics placed inside the body of the instrument, resulting in a resonant, richly-muffled sound, the music itself dreamy in a way that recalls Eno's "On Land" (a comparison I'm sure I've made before--but I think Asher's has, at the same time, a different character, one I like at least as much). There's a wonderful contrast between the music and the grainy rawness of the imagery. Those images themselves flit back and forth between the harsh, cold reality of rock, ice and snow and entirely abstract, pulsating patterns.

Now, if they'd only release that Asher video shown that same evening 2 1/2 years ago... 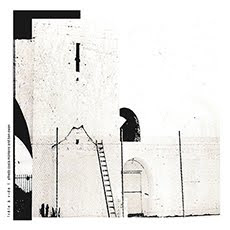 A strong, tough recording from Costa Monteiro (walkman feedbacks, shortwave radio) and Owen (microphone, mixer, op amp, tone arm, sw/mw radio). Four tracks, sustained noise (though I don't read them as drones)--more or less from static or humming regions with an isolated feel. I'm not sure whether this was a long-range interaction or not (I suspect so) but the music carries a kind of detached sense which I think works very well. I've been reading a lot on Robert Ryman lately and found myself relating this music to his paintings insofar as allowing the material to simply speak on its own, with no interpretive intermediary. Similarly, the blankness and thereness of these sounds causes one to shift away from Costa Monteiro and Owen as such and to just experience the sounds instead of talking about them, contextualizing them, etc. Which I'd invite folks to do as it's very rewarding.