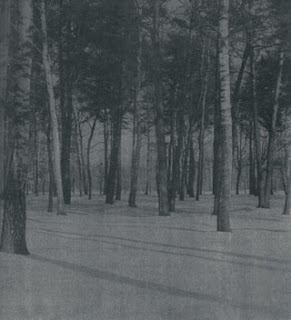 It's an interesting idea, laden with resonance: deal with the fact that images from Nazi internment facilities, deportation centers and concentration camps have long since,for many, especially the young, become iconic, divorced from their deep, horrific meaning. Garin (phonography) and Gobart (photography) set about to document the current state of these locations via field recordings and photos of the unspectacular, the everyday even as that "normalcy" is imbued with what those sites, from France to Poland, have experienced.

Two discs, a dozen photos and a fine essay (in English, German and French), all presented with great care and subdued beauty. So it's not about the sounds as such, finely recorded though they are (or the wonderful, silvered photos). As they write:

"Through ordinary elements [... ], sound is what enables the audience to skip gradually towards a certain abstraction, providing a necessary distance for us to penetrate further into thought."

Even so, when one hears the gravelly, regular crunch of tourists boots as they "see the sights", it's difficult to not recall other kinds of boots. Water dripping in some interior space conjures up a dark foreboding of its own. Trucks, dogs, conversation--all take on an added patina. And when, at the beginning of the second disc, one hears an amateur orchestra working its way through "Eine Kleine Nachtmusik", well...

A very strong document, then, not so much as a music/image release but for what the sounds and photos evoke in the consciousness of any thinking individual. 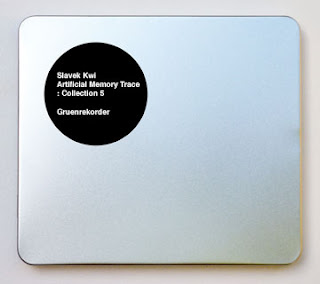 You know, when you inscribe a release with the admonition: "Perception. No cognition. Listen.", you better deliver. Instead, Kwi presents a lengthy (80 minute), meandering set involving electronics and field recordings that's woozy throughout, sometimes sounding like a not particularly rigorous Sun Ra episode, other times recalling some of Reich's experiments with taped sounds ("Different Trains", say), still other occasions just spinning his wheels. It unravels without a logic or reason for being that I could discern, just wave after wave of sounds spliced together more for surface effect than anything else. All tumult, little respect for space, kind of like a Georges Matthieu approach to soundscaping...Listening without cognition yields little; with cognition, still not so much.
Posted by Brian Olewnick at 3/05/2011 02:15:00 PM

seems to me like a quite similar concept that one of the 'Shoah' by Claude Lanzmann, 8 hour movie that with the absence of 'object' just with 'ordinary' sites, voices and faces reveals much more ...

Brian, my comment is a question and relates to a post of yours from 2003. Did you ever find out about the Japanese ink painting of 5 pomegranates that you saw in your Japanese art history class? I was googling that painting recently, trying to describe it to my daughter-in-law, who is an art student and who had left three figs sitting all alone on my kitchen counter for long time. All I could find was your post. If you had more information, I would love to know, too.
Thanks, Virginia Hamilton
vahamilton@juno.com

ha! answered privately but if anyone else knows this piece, please let me (and Virginia) know