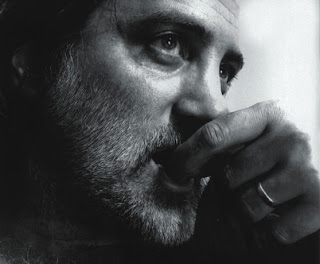 While I was working at Environ in the late 70s, we had a deal with NMDS (New Music Distribution Service) enabling us to take LPs on consignment, attempt to sell them at the loft, garnering a couple bucks profit on each. So I made many a trip up to the NMDS brownstone at 6 West 95th St. I think Bley and Mantler lived there, though I never caught sight of them. The first floor was given over to the record distribution business, manned by two or three fellows at a time, including the late Taylor Storer and Kip Hanrahan. It was always an enjoyable visit, talking music with whoever was there, pawing through new arrivals, choosing what to take back. Hanrahan I recall being a bit diffident, but not unpleasant, often sporting a red-star beret, something I associated (wrongly?) with Mao.

That ended around 1980. Sometime in '81 or '82, I was making a routine visit to the J&R Jazz annex which, at the time, was located on Nassau St., a block behind City Hall park. Browsing through the new arrivals section, I came across "Coup de Tête" and said, "Hey! I recognize that guy." Picked it up. Talk about a breath of fresh air.

Several years before Zorn, Hanrahan was in full auteur mode (and with arguably better taste to boot) from the get go. Essentially, he'd use Latin music as his bedrock (Cuban more than anything else, but also Nuyorican, tango and others), melding it with musicians from the jazz loft scene (Chico Freeman, Carlos Ward, John Stubblefield) as well as some from the nascent downtown improv area (Arto Lindsay, George Cartwright), always with a heavy emphasis on bass/percussion interplay (here, Jamaaladeen Tacuma and Andy Gonzalez, later Steve Swallow, Jack Bruce, etc.) Plus, his lyrics were hyper-personal, raw and sometimes, on romantic pieces, told from the woman's point of view, the following a nice example, sung by Lisa Herman:

Additionally, and crucially, Hanrahan had a decided romantic bent, leavening his mordancy with, on the first record, side-ending works by Marguerite Duras ("India Song") and Teo Macero (!) ("Heart on My Sleeve"). Merely having Teo Macero on the same record with, say, Arto Lindsay, was rather stunning.

There's a bit of a grab bag feel to "Coup de Tête"; one has the impression that Hanrahan perhaps thought this could be his only opportunity and threw in everything he could but enough of them are jewels that it's no big deal. Listened to today, the percussion just leaps out, incredibly vibrant and alive--Jerry Gonzalez, Daniel Ponce, Nicky Marrero, Orlando "Puntilla" Rios--these guys are just amazing. The songs are fine, unusually structured and lyrically arresting. fwiw, here's the AMG review I wrote some 10 years ago.

All told, though, "Desire Develops an Edge", the next release, is Hanrahan's finest. Issued originally on two discs, one an LP, one an EP, he expands on certain facets of "Coup de Tête", particularly the percussion and electric basses, adding substantial contributions from Jack Bruce (and how thrilling it was to see Bruce suddenly reappear in a vital context after, for me, some 14 years) and the great Haitian guitarist Elysee Pyronneau. One amazing piece after another, ranging from percussion and chant to rocking to, in songs like "Two (Still in Half-Life)", things really unique to Hanrahan. That piece, with its phenomenal intertwining of basses, wonderful lyrics ("no matter how softly we touch/we seem to bruise") and extraordinary tension and release when the cymbal rhythm kicks in, is one of my all-time favorite songs.

He followed this with "Vertical's Currency", a rather fine stab at something of a pop album, using a good deal of keyboards (Peter Scherer) for the first time, some more straight-forward melodic lines with the crooning Bruce. "Make Love 2" is indeed a song that, in a just world, would have been a pop hit. "Shadow Song", modeled on a theme of Mario Bauza, is a superbly swaggering large band number bearing, with delightful awkwardness, introspective, self-critical lyrics ("Why are these blues so attractive to my lovers/And arrogant to my friends?"). He's straddling a divide here, in dangerously slippery territory, but manages to pull it off.

Next, there's an odd entry in Hanrahan's discography, okay in and of itself but indicative of a disturbing trend that would proliferate in upcoming years. "A Few Short Notes from the End" is an EP, five songs, cobbled together from sessions of the prior few years--not bad but really with no reason for existing other than, I guess, to keep his name out there. There's a more rockish, far inferior version of "Two (Still in Half-Life)" and a few other nice pieces but it's pretty slight.

Around '88, Sting developed a guilty socio-musical conscience and initiated the Pangaea label, ostensibly to offer relatively creative fare. Steve Coleman's (pretty bad) "Sine Die" appeared here, as did Hanrahan's "Days and Nights of Blue Luck Inverted". It's a strange recording--far more romantic in overall tone than earlier ones, often to good effect as on the opening rendition of the rarely heard Ellington composition*, "Love Is Like a Cigarette", featuring a great vocal by the almost entirely unknown Clare Bathé (who, I discovered via You Tube, sang a bit with Lionel Hampton). But it's also, perhaps unsurprisingly given the label, far slicker than earlier efforts and, worse, occasionally settles into the kind of coolness, blandness even, that would come to infect a good bit of his 90s music (I wonder if Fernando Saunders, then just off the Lou Reed band, may have been a culprit). Again, not bad, just redolent of a "professional" air, a far cry from the percussion of "Coup de Tête" where the sound seemed lifted directly from the street.

That was the last vinyl of his I bought. The 90s output was intermittently good, often chaotic, usually a melange of sessions ranging over several years with little connectedness. Don Pullen would appear years after he died alongside pieces recorded contemporaneously in a song cycle derived from the Arabian Nights. The structures are rather dreamlike, but not as compelling as desired--one has the image of the auteur having spent too long locked up in his studio, trying to assemble the ultimate jazz/Latin/skronk fusion album, having missed other vital things having occurred in the meantime.

I should mention, in fairness, that Hanrahan's label, American Clave, issued a huge amount of spectacular music, including the first two Conjure recordings, Astor Piazzolla's first US recordings, Deep Rumba and more.

recently Kip hanrahan played here in Ljubljana on 51. Ljubljana Jazz Festival, where he presented his latest project 'Beautiful Scars', released on his American Clave label. While the record isn't bad, the reports of my kamerads from the concert were disastrous- apparently the cocert felt totally apart and his blend (or fusion) of different styles & idioms (and musicians from different traditions) was a total and sad mess ...

I forgot to mention that I saw Hanrahan play the Public Theater in NYC around '84-'85, I guess, I think after the release of "Vertical's Currency". It was also an unwieldy event, Hanrahan rushing about the stage, trying to organize things on the fly. The worst was Jack Bruce's attitude. He was clearly underprepared, singing his lyrics off of sheet music and obviously not very into it. At one point, having sung some typically personal and (intentionally) awkward line, he looked up, shrugged and said, "I don't know, that's what it says here."

Nice appreciation, thanks, Brian. I've got all these early Hanrahan LPs in regular rotation on my iPod (my own vinyl rips), great albums indeed.

Your mention of the NMDS takes me back to high school, when my one friend who liked avant stuff and I somehow discovered it. It was a godsend, and we were so excited to pore over the tiny type of their catalog. I bought the Jazz Composer's Orchestra set and other gems because of them.

Hey Craig--I well remember that NMDS catalog that I'd also pore over, before moving to NYC, still up in Poughkeepsie, around '73-'74. So many enticing things there...still kick myself for not ordering some stuff, like the Chatham Square LPs.

As chance would have it I was listening to "Conjure" when I read this post so felt I should write. You mirror my reflections on the discovery of these albums starting back in 1982. I saw Hanrahan et al around the same time in DC you saw them in NYC and Jack Bruce was thankfully much more involved. Hanrahan was doing the stage director-dashing you so well describe. A further reflection on the era: I told a friend (who then owned one of the better used record stores in the DC area) about Coup de Tete--the next time I went in his shop he said "thanks a lot--I was playing "Coup de Tete" on my radio show (on WMUC--Univ. of Maryland open air station at the time) and suddenly I hear a woman say "fuck me in the ass" going out over the air!"

heh. Yes, I recall Linda doing a double-take or two back then, "What did she just say?"

Nice summary of your interesting experiences with KH over time. I came to him only two or three years ago and find myself liking the early stuff better, and I agree that "Desire" is his best.

I am of the right age to "remember" the 80s and so I feel like I missed something, way back then, by missing out on KH's albums as they were released. He seems to be regarded as in that time, and his songs do have an oddly "dated" feel. I like it. I just wish I could have been in on it. (As it was I was studying to be an English professor and for quite a long time forgot, literally, how important music is. And so missed a lot of music till I came to my senses and started listening to jazz again in the later 90s.)

Thanks, David. I'm always curious how certain things sound to people ten or more years older or younger than me, what context they heard something in, the level of nostalgic feeling they *don't* have that I do (and vice versa, of course, for me with thing's they cut their teeth on)