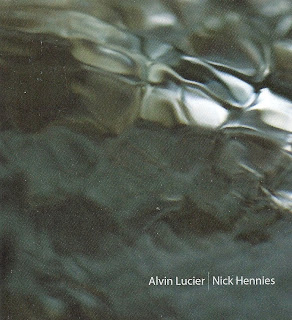 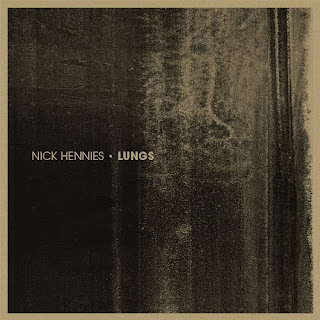 The first recording of Alvin Lucier I ever owned was Vol. II of "Still and Moving Lines of Silence in Families of Hyperbolas", the Lovely Music LP. Why Vol. II, I'm not sure except that it was probably sitting there in a bin, sometime in the early 80s. I'd heard "I Am Sitting In a Room" on radio but for some reason hadn't picked it up, perhaps simply due to not seeing it around. I'm sure I was intrigued by the title of this one, though. How could one not be? At the time, I found the music daunting, however. So spare and clean, sterile even, too much of a "science experiment" feel--let's see what happens when various mallet instruments are paired with sine waves attuned, as closely as possible, in pitch. I'd since returned to it and, not surprisingly, realized how much I'd been missing, both in the richness and chilly beauty of the piece itself and as an antecedent of much contemporary work I admired.

Nick Hennies, who has been working with more composed forms recently, provides us with an excellent recording of the piece. The structure is fairly simple--four sections, one each for marimba, xylophone, glockenspiel and vibraphone (though other instruments can be used), each accompanied by sine waves, beating out regular, unaccented rhythms which shift now and then. As closely as one may attempt to match the percussion and sines, inevitably there are differences which result in resonant beats in the air "between" the sound sources. One merely experiences this but, as in Lucier's best work, there's ineffably more going on than a sonic phenomenon. You get glimpses of poetry, of natural wonder--it can be inexplicably moving, like the appearance of melodic content in "I Am Sitting In a Room".

This is a gorgeous recording, beautifully realized by Hennies and a must-hear for anyone interested in Lucier's music.

Hennie's explores, in a way, adjacent worlds on his own "Lungs" (Full Spectrum), for pieces for percussion, two of which also employ voice. Similar to some of Lucier's approaches, he investigates the "resonant frequencies" of the drum skins, the interaction of their excitation by touch or sound waves (voice). It's very subtle, very patient music, Hennies allowing a given element to hang in space and evanesce, waiting a bit to introduce the next one. The two longer cuts, especially, are very rich tracts, the title piece a wonderful stew of low, silky drones and surface clatter, the latter like thousands of spores released from the former, building into a massive and dense sound world. "Second Skin with Lings", listed as using only "live drums" is remarkable as well, the skins rubbed and rolled with great care and subtlety, maintaining a constant presence but feeling quite atmospheric and elemental; difficult to describe but a very unique sound. Solid, excellent disc.

my, you'd have a prolific long weekend! for once, i am actually keeping up with you (listening wise). this just inspired me to put on the lucier. 'lungs' has taken me a bit longer to fully give in to, i think largely because it's a tricky one to listen to physically speaking (lots of very low tones, very quiet). maybe that will go on after the lucier now that things are so quiet here.