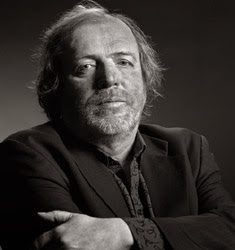 I just heard that Willem Breuker died, at 66.

I've written much of this before, but thought I'd do so again.

In late '77, I was working at Environ. We'd recently moved north on Broadway a couple of blocks from 476 to...535? I forget the exact number. It was on the second floor, a good-sized room. Looking at the schedule, I saw the Willem Breuker Kollektief had been booked. I only knew Breuker's name in connection with other European improvisers, a genre I was at the time not too keen on, being immersed in all things AACM and finding the plinkety-plonk end of things overly effete. So I kind of resigned myself to three evenings of the same and trudged wearily to the loft.

Well. The set they played, for all of about 25 people, was essentially the one documented on the BASF album, "The European Scene" (1975), beginning with Leo Cuypers' portentous chords on "Steaming". Unbelievable. I'd never heard that combination of tightness and freedom before, strung over one after another killer riff. I'd never seen that kind of humor in, obviously, serious music before. I don't think I'd ever heard that many strong players, one after another, in a band like that. Breuker, Van Norden, Raaymakers, Driessen, Van Manen, Hunnekink, Jan Woolf, Cuypers, Gorter, Verdurman. They absolutely blew my head off.

The second night, the crowd had doubled, many people having clearly been dragged over by first-nighters expounding on the event they'd witnessed. Robert Palmer was there, maybe the first evening too. There was quite the air of anticipation among the crowd. The houselights dimmed as the members of the Kollektief, in an unsteady line, slowly made their way, stumbling, toward the playing area. They bumped into one another, mumbled, grunted, stood around the instruments as though they were in alien territory. Some members lifted a saxophone or a trumpet, peered at it curiously, tapped on it, banged it on the floor. I think Jan Woolf crawled into the piano. This went on for about 15 minutes. I could see angered members of the audience casting evil glances at their friends--"This is what you said was so great?!?!" Eventually, on some discreet signal from Breuker, the ten members swiftly picked up their appropriate instruments and launched into a typical high precision riff and the game was on. I forget the set list, but I think it included selections that appeared on the '77 BVHaast release called..."On Tour"? I know "Potsdamer Stomp" was in there.

The third night, after an NYT review by Palmer, we had a full house, about 125 people. Another great set. They added on an event at NYU, playing at a Bartertown festival, wearing tuxedos.

Breuker himself, I always found a bit diffident and gruff. Other members of the band, notably Boy, Arjen and Jan were great, always enjoyed talking with them.

So, I became quite a big fan, scarfing up everything I could. Actually, I remember members of the Kollektief returning to Environ with boxes of LPs they'd found around town. I recall Rahsaan being a big favorite. I caught them every time they returned to NYC which was pretty much every two years for a while, often bringing friends who were otherwise uninterested int he music I listened to as WBK provided a fairly entertaining entryway.

They created some great music in roughly the decade 1975-85. I still think "In Holland" is one of the very best jazz recordings from the 80s and urge everyone to give it a shot.

Toward the late 80s, as Breuker steered the ensemble to more of a repertoire group, my interest began to wane and the last few things I heard, in the late 90s, were pretty awful, imho.

But I give huge thanks to him for some incredible experiences and a whole lot of wonderful music.

Breuker was my gateway to New Dutch Swing and the whole European improv thing. Unfortunately I didn't hear him until his About Time release, after which I saw him twice on his subsequent tour; both were hugely entertaining but the second was a carbon copy of the first which left me feeling somewhat empty. The appeal of his best music can't be denied or understated. In Holland used to be a staple of my road trip discs; it was just about the only one that Susan ever said she found enjoyable. Higher praise cannot be found.

A memorial website was created for Willem Breuker! Honor his memory by contributing to his memorial site http://willembreuker.people2remember.com/