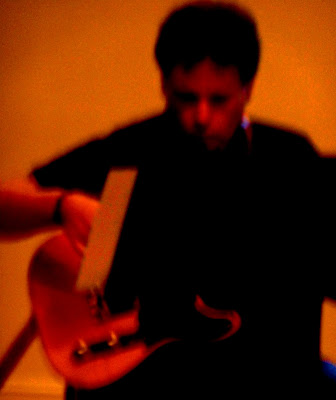 Barry Chabala gave a solo performance last evening in a room in St. Mark's Church, Manhattan. Although he'd mentioned to me some of the selections beforehand, the concert was presented as a single, uninterrupted set, so it wasn't until afterward that I was able to get a picture of the structure.

Throughout, field recordings were heard, beginning with one by James Connell made in NYC, that included subways, Yankee fans, "Take Five" and other archetypal New York sounds. I knew that a couple of Michael Pisaro's "Transparent Cities" works were to be part of the program and was momentarily confused, both by the NYC-nature of the sounds (Pisaro's recordings having been done in and around LA) and the rather loud, harsh single notes limned by Chabala which stood out quite a bit, much more so than the sine tones in Pisaro's original recording. So there was a bit of misunderstanding on my part.

As well, it turned out that Chabala was interpolating parts of Pisaro's "Mind is Moving" during the entire evening, further "muddying" the waters. In any case, when he moved into the "Transparent Cities" pieces (nos 8 & 21), things settled more into the vein I'd expected, though again, his guitar, whether softly plucked or excited by an e-bow, remained somewhat more prominent than the sine waves one had become used to in the Wandelweiser releases. But the integration with the taped sounds felt true and slid for the first time--very, very nice.

As Pisaro uses considerable spans of silence in many of his works, one never was quite sure that a piece had ended. But Chabala soon segued into an area clearly different with Pisaro's "sleep, river, bells, chords" (solo guitar version) which essentially consisted of 12 or so (I glanced at the score but don't recall precisely) four-note rising arpeggios, each (I think) different and each payed rather clearly, with some vibrato, by Chabala over a varying series of field recordings. Even better, the 8 o'clock bells that tolled in St. Mark's church appeared just before a quasi-similar peal emerged from the guitar.

Finally, "Mind Is Moving" emerged again as it had through the evening, now played over a tape by Chabala that included a particularly lovely rain section and the sounds of his two sons, talking.

It was a lot to take in in one gulp and may have benefited a bit by either breaking up the pieces or providing a road map giving the listeners at least a glimmer of the forthcoming structure, but there were beautiful moments strewn through and the very nature of the slow, steady pace caused one to concentrate mightily and really appreciate the sounds, their contrasts and affinities in texture and spatial array. A fine evening.
Posted by Brian Olewnick at 7/01/2010 09:41:00 AM

hey brian, thanks for coming out and the nice words here. as the evening was set up as a journey of sorts, i didnt want to break at all. maybe i should have explained what was going to happen a little before hand. next time i will make up a program for sure!

Dammit, wish I could have caught this.

I think having a program to hand out would have been nice, but that's really quibble. this was a deceptively challenging concert ("oh it's gonna be field recs and some spare guitar stuff here and there" could be pretty mellow) - the pace & structure was pretty exquisite, and Barry's playing explored a fine range that for some reason I didn't expect. One of the loveliest evenings I've spent in that room - the climate, lighting, just enough noise from leaking in from the city outside, etc.

for those who'd like to re-live the magic, this show is now available for streaming and download via Bandcamp https://barrychabala.bandcamp.com/album/saint-marks-nyc