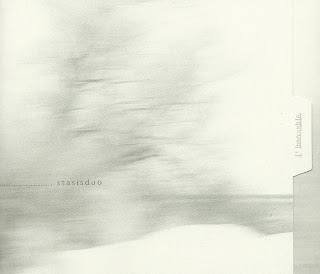 One of the interesting things here, in the recording's structure, is that it begins in a kind of controlled fury, a roiling electric static field that, over the course of just a few minutes, hurtles toward something of an explosive short circuit. From then on, over the course of the next seven tracks (about 35 minutes), the sound dwindles down to almost nil, almost like remnants, sputters or faint sparks still active in the darkness. Ultimately, an alive sizzle has emerged, a pooling of ionized gas on the floor, just beginning to well up into potent form, when the sound ceases.

Fine record, very good to hear from this pair (Adam Sussman and Matt Earle, btw) once again. Get it.

Does l'Innomable no longer have a site? In any case, available from erstdist 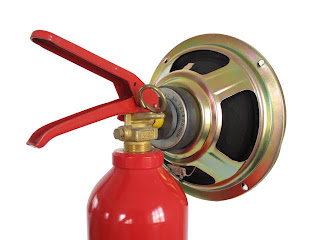 It commences with a lion's roar, presumably of MGM vintage, and soon segues into a fractured version of "Somewhere Over the Rainbow". Erik M has fashioned a work largely comprised of movie cliches (I'm making the assumption on the French portions, which make up a large chunk herein, that they're roughly equivalent as to their place in the Gallic psyche as things like Judy Garland are in the US), from gunshots to "Round Midnight" to disco beats, to John Wayne with snatches of conversation throughout. So it's a collage and, to these ears, has many of the pluses and minuses I tend to associate with that form. Superficially exciting with tons of contrasting and clashing textures and shapes but, at the end, I'm left feeling undernourished. There are any number of very attractive sequence here, for example the talk, street noise and slow, funk-jazz beat combination that occurs around the 14-minute mark ("If you please, doctor"). It's all very well done, quite cohesive and fans of Erik M. should be well-pleased. Personally, I've always enjoyed his work more when he was part of an ensemble (with Voice Crack, say) and still tend to feel that way. For others, this will be all they require. 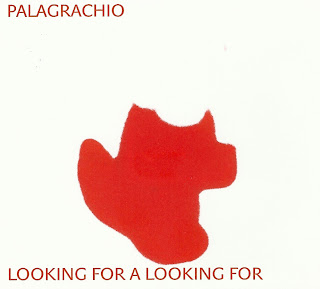 Palagrachio is Peter Graham (piano, harmonium) and Ivan Palacky (amplified knitting machine). Once again, as with Palacky earlier release, there's an interactive cover in play (created by the design group < href=http://huberokororo.com/>Hubero Kororo); this time, I was aware of the impending stain and took great enjoyment watching it spread into the image above. Two tracks, Graham on piano on the first, beginning with tonal trills, Palacky plying that knitting machine which takes on a very steam-punk character, percolating bumpily beneath the sonorous keyboard, a lovely mix. There's a fine expansiveness, almost luxuriousness in play here, though never losing the edge, always bearing a tinge of acidity. They don't linger overlong, moving into various areas over the piece's 33 minutes, retaining an overall mood of agitated beauty, Graham working the piano's interior (and elsewhere), Palacky--well, I've little notion of how he extracts what he does (though check this out)--but the subsidence into small clicks, squeaks and whirs is marvelous.

About midway through the second piece, the harmonium billows forth in an incredibly rich kind of fanfare, engulfing the listener, the clattering knitting machine borne aloft. There's an odd disjuncture about five minutes from the end, but it's a wonderful trip, a very unique commingling of sound with a fine structure beneath.

yes Brian the L'Innomable site is down (also due to our jerk of administrator) so we're now working on a new one which hopefully will be soon finished. Thanx for the words ...