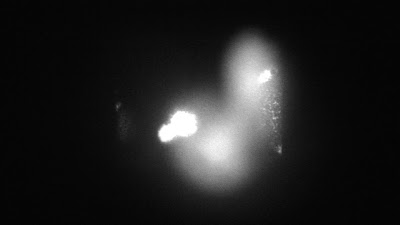 Some thoughts on Olivia Block's performance at Experimental Intermedia last evening. As veteran readers are aware, I love most all of Block's music that I've heard so if I say that the three pieces presented all had problematic aspects for me, it's at least partially based on very high expectations.

First up was a set of three works for solo violin (Erika Dicker). These were the least successful pieces of the night, imho, and a little baffling in the sense of wondering as to their reason for being. They very much struck me as exercises in a kind of avant string playing that I associate with mid to late 60s work by composers like Penderecki. Indeed, more than once I was reminded of his Capriccio for Violin and Orchestra (1967) where, as near as I could discern, similar techniques were employed. It's not that those techniques were or are without interest--each of the three sections had intriguing, occasionally beautiful aspects--just that I couldn't hear a larger reason behind the pieces aside from demonstrating this or that approach. On the first, the violinist allowed the bow to float from just above the bridge to below it, generating a harsh screech as it passed or lingered on the bridge itself. Within that (echoed in the following composition by the clarinets), she played triplet patterns that, for these ears, have the unfortunate quality of evoking a kind of minimalist treading of water that I found myself wanting to bat away. The next used, if I'm not mistaken, col legno technique while the last scrabbled furiously and two-handedly at the neck interspersed with broad, bowed swipes across the strings. As I said, I could pick out certain elements of each that were of interest, but on the whole, it sounded too much of the practice room, with accents and phrasing that too strongly evoked standard post-serial flourishes.

Next up was a lengthy composition (about an hour?) for violin, percussion (Michael Evans), three clarinets doubling bass clarinet (Alejandro Acierto, Alice Lee & Josh Sinton) and electronics. This was much more "in the ballpark" re: Olivia's recorded work, especially with the hard-edged percussive sounds, the electronics and field recordings and the massed, low reeds. My main issue was, given its length, its unwieldiness as a cohesive piece. Her best work has a kind of subtle narrative quality to it, a kind of arc or spine (not an obvious one) that reveals itself as it occurs, causing the listener to think, "Yes, even though I didn't anticipate it, this clearly stems from that and sounds beautiful alongside it." This piece struck me as more episodic although there were certainly recurring motifs and, arguably, a climax or two. I just wanted some tightening. Those cavils aside, there was many a gorgeous moment to be heard. The percussionist made ample use of strung together cymbals and hubcaps, producing a wonderful clatter, a couple of times receding to the depths of the storage areas to the left of the stage space, echoing the bangs from the heating pipes in the loft, later humorously attempting to corral them atop his horizontal bass drum. One of those climactic moments occurred when the trio of bass clarinets suddenly broke into a kind of chorale section, a rich, deep series of chords embedded in rumbling electronics and the aforementioned percussion. As a general rule, I found her music more rewarding the denser and, frankly, louder it was last night. That might be an artifact of the space; on disc, her quiet sounds are clearly etched and often quite moving. Here, they may have been a bit lost in the space. But when everything was in play, I heard the lush, rocky depths I've come to love in her music. I hope this is recorded, as I'd love to be able to give it a bunch of good listens.

After a break, the final piece was presented, a collaboration with the video artists Sandra Leah Gibson and Luis Recoder. This trio was responsible for one of my big favorite releases of the past decade, the untitled DVD on SoS Editions from 2007 so I was pretty excited to see a live performance. Both visually and musically, the DVD was very circumscribed, very concentrated in one general area (though unearthing all sorts of variations within that area), one of its great strengths. Last night's video, while clearly related to that previous work, was much more wide-ranging. Some of the more beautiful moments echoed the kind of out-of-focus, view-through-a-rainy-windshield, globular aspects of the earlier work, but large segments otherwise portrayed flickering light patterns (incidentally echoed in lovely fashion on the ceiling of the loft as headlights passed by on Centre St., three floors below), overlapping semi-circular wedges and distended rectangles of light, seeming images of forests passed from a train (though dreamlike, never quite sure of their identity) and "damaged" film stock. It was a great deal to take in and part of me missed the singular focus encountered earlier though if I let myself go with the images, it was quite a ride. Olivia's music melded very well, in fact was often absorbed into the images, the two streams felt as one, which is a high compliment for music/video collaborations. Something I'd like very much to see/hear again. This was their first time doing a live performance together, very impressive how well it cohered.

So, I have my caveats, but there was more than enough strong, resonating work at hand. Tonight, Michael Pisaro is presenting a new work for guitar, bass clarinet, sine waves and field recordings. Can't wait.
Posted by Brian Olewnick at 12/14/2009 08:47:00 AM

nice review brian. pretty much how i heard it as well. i could have done without the violin pieces - Maybe a short intro to the main piece would have been plenty. the large work, once it got going, was fantastic. just not enough of the good stuff for me. i would have preferred more Olivia, utilizing more of the sound system at her disposal, with those gorgeous clarinets in there for accents & commentary. i enjoyed the video piece as well. very nice.

I'm painfully out of town until tomorrow night for SEM at Paula Cooper...THEN I can get to EI.

Just a note - I thought that Evans' cymbals were attached to empty 16mm film reels, not hubcaps.

I think that I had a more positive overall feeling from the show, thought it was one of the best shows I've seen all year - diverse, colorful and quite moving.

this is just wild speculation, but. . . hasn't block started working in academia? SAIC is hardly music-school-ville and is home to sound great improvisers and sound artists, but these descriptions strike me a bit as academia/grant-world.

Jesse, no idea; Nirav, you may well be correct.

Olivia and I had a very rewarding and open discussion about her evening and my response to it after Pisaro's show last night (which I'll attempt to write about later). She may post something here soon. It was great to get such honest feedback, so quickly. I always assume I'm missing a certain amount of what's actually occurring, especially on a one-time event, and she was exceptionally gracious filling me in while at the same time respecting my take on things. Great evening all around.

Hi Brian,
It was an interesting and rewarding dialogue we had last night, I agree. As you know I admire your work, and always appreciate your writing. I do, however, disagree with many of your points regarding my show at EI--but we talked about all that. I wanted to comment on one point regarding the solo violin material.
However you may feel about the violin pieces, I think it is worthwhile to mention the excellent performance by Erica Dicker. The physical demands of the third movement of that work are very rigorous. I am interested in the idea of physicality in performance right now, and I am including that in live compositions. She put her entire body into those gestures, which I found very beautiful. Although you may have perceived those pieces as a processional of extended techniques (I strongly disagree), she actually achieved many of the precise sounds that I was after, which can only be achieved using those particular techniques (it's about the sound itself, not the technique). I felt that she understood the material and did a wonderful job in the performance. I wish she had been amplified more thoroughly so that the nuances of the second piece came through. This was my fault.
I feel like it is important to point out the positive aspects of the performance itself, separating that from the composition, which you may or may not like.
Thanks for listening!
Olivia
P.S. jesse, I am not an academic composer, although I am not opposed to the idea if indeed it would lead to the "grant-world" you speak of...a world of grants doesn't sound bad

Since most of the prior contention revolved around the violin pieces... I would like to say that was some of the most enjoyable material for me. The first movement had such precious detail in the overtones, as Erica Dicker was fabulous!

I really found the textural elements, specifically the differentiation in the crunchy attacks, were immaculate, reminiscent of Helmut Lachenmann.

Olivia, I think you have celebrated some of the best elements of 21st century academia...

"P.S. jesse, I am not an academic composer, although I am not opposed to the idea if indeed it would lead to the "grant-world" you speak of...a world of grants doesn't sound bad"

olivia - sorry if that sounded ad-hominem-y. i wasn't even at the performance, and maybe i was expressing more about my own frustrations (seeing a lot of terrible music get funded simply because it's composed - seeing people make music on paper just to get it funded) than anything else, and i let brian's description possibly set off some bells. nothing wrong with grant-world, i guess, but a lot of the work blows, at least from my view.

Well I'm just disappointed Brian's squirming had nothing to do with old age and incontinence pants... ;)

Thanks for the write-ups everyone anyway, sounds like a good couple of nights. One of those rare occasions when I wish the Atlantic Ocean wasn't there!! :D

Bless you, Michael Waller!
Jesse:
It's okay. It's hilarious to think of the School of the Art Institute as a haven for academic music, though.
Here is a link to two of the violin pieces performed by Erica at E.I.--I am just now uploading them onto my web page and myspace page.