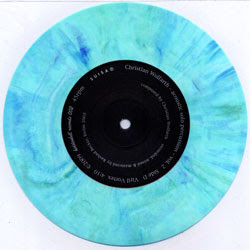 The second 7" vinyl release from Wolfarth, two new (if brief) explorations. Given their presumed acoustic-ness, it's fun to figure out exactly how he's generating sounds here. On "Elastic Stream", one assumes bowed or otherwise rubbed surfaces, both drum-head and metal, but the number of plies involved is impressive--it's very difficult to try to mentally parse them. One low, hornlike drone in particular is pure and steady enough to be baffling as are what i hear as faint steel drum tintinnabulations. It's five minute span (and abrupt end) are a bit frustrating as there's plenty to hear, but as a raw slab of sound, it's quite fine. Side B, Viril Vortex, is quite different and, I find, more fascinating. Guessing, it sounds to be "simply" Wolfarth's hands and fingers on drumlike surfaces, percussive but soft-padded. It begins with disjointed patter that eventually coalesces, very non-systematically, into irregular waves and eddies, as though being sloshed around in a large bowl, back to spareness, flooding again. I even pick up echoes of West African village drumming, that same "loose rigor". Really well constructed piece, basic elements, fine sound. 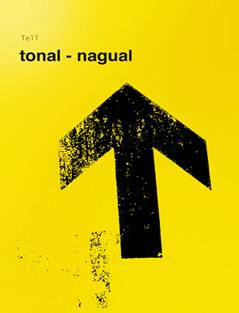 Tell is Wolfarth with Joke Lenz [erm, Lanz] (turntables, electronics), a new name to me and one that google seems to largely ignore despite his site. In any case, he brings to the table, at least based on this recording, something of the manner of Martin Tetreault, i.e. hyperactive and noisy. Sometimes this works, sometimes it doesn't. The titles of the tracks ("Virus Infection B-23", "Replicant Dance", etc.) point toward a dystopic SF kind of vision and even when Lanz reins it in a bit there are some corny sounds like echoing voices reminiscent of Hendrix' "1983" that offset the welcome lack of clutter. Repetitive elements come and go, reinforcing a vague industrial aura (not to the music's advantage, imho) and Wolfarth inserts any number of interesting colors, adding depth to the scene but overall, not nearly enough.

Try spelling it Lanz and google will merrily reward you

he's been the longtime main dude in sudden infant, part of the swiss "Schimpfluch-gruppe" (along with runzelstirn and gurglestock, etc.). there was a few-page piece in the wire a few months back as well. more kind of noise/performance/neo-aktionist than, i guess, your usual bag, brian.

Both Christians [Weber and Wolfarth] have collaborated with Sudden Infant, live and on CDs. Weber on electric bass (!!!!!!!!!!).

didn't heard these two yet, but just today got Wolfarth's new release on Leo Records- Circle & Line 2 -second record by a duo w saxophonist Donald Fisch 8(who wrote all pieces). In there there is a song called 'Robert Walser' and the author of supporting text uses his quote on music there which i kinda like. It goes: 'There's something missing when i don't hear music, and when i do, then there's really something missing. That's the best i can say about music.'