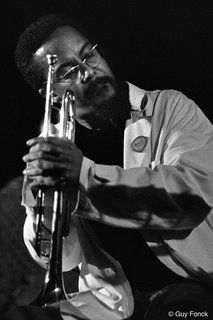 When someone stops me on the street and says, "Olewnick, if you had to pick one piece that epitomizes the best in post-Coltrane avant jazz, what would it be?" (this occurs three or four times daily) I usually answer, "Ohnedaruth, from the Art Ensemble's 'Phase One' on Prestige", from 1971.

This piece has everything--three distinct structural elements, each of them paramount in the music and some extraordinary playing, capped by one of the fiercest solos I know. The first third or so is taken up by spacey percussion, all metallic and gong or cymbal oriented, beautifully done with no sense of either hurrying or kitschy mysticism. Favors' electric bass eventually joins in, softly booming single notes that blend in with the gongs. Then his acoustic begins weaving through the mix, gradually gaining force until the horns explode in a marvelous fanfare, amazing harmonics. The theme, Jarman's, is rattled off, no nonsense, banged out, its hard boppish lines shot out like a nail gun. An explosion of horns once again, then three solos. First, the superbly liquid Jarman on tenor then a raucous and sardonic Bowie over an eruptive drum backing from Moye, who's fantastic throughout. But the payoff is the unbelievable Roscoe solo, as ferocious and backbreakingly strong as anything I've ever heard him do. Typically, he edges into it, laying slabs like thick paint from a palette knife, building the groundwork from which he launches, tearing holes in the ozone (Will, ya gotta love the structure in this one!). The final few roars are as powerful as you'll find in jazz. The fanfare returns briefly and Bam! it's over.

"Lebert Aaly" ain't half bad either even if they butcher the anagram. Another "Horn Web" in a sense, with (I think) Bowie's steer horns leading the way. Another fine example of loose spaciness working wonderfully, everything connected, no sense of self-indulgence, imaginative use of multiple sounds. Great walking bass line from Favors toward the end; after Mingus, there's no walking bass I'd rather hear. 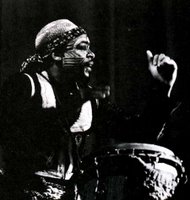 "Bap-Tizum". Well, what can one say? As I said before, this was my intro to the band and the damn thing still kills. A live set from the Ann Arbor Blues and Jazz Festival, September 9, 1972, introduced by John Sinclair to a crowd of 10,000, as he says in the liners, "most of whom had never heard anything like this music before in their young lives." It was the sort of set that would typify and AEC performance in years to come: An opening, Moye-led percussion piece that's super powerful. To this day, when I'm idly tapping out rhythms somewhere, I'm likely to fall into this piece (either this or Reich's 'Drumming'). Moans and screams lead into Favors' "Immm" (boy do I miss the titles from those days!), a spacey, part spoken word piece that actually works. Then there's Roscoe and his structure, his perverse sense of pacing and slab-like constructiveness, "Unanka". A sublime theme leads to a funereal bass rhythm over which Mitchell plays so deliciously off, so against his accompaniment. This is a piece I had a good deal of trouble with as a young 'un but have come to really appreciate. Side two begins with Mitchell's short and hectic "Oouffnoon" (!!!) featuring splattering Bowie before segueing into another version of "Ohnedaruth", perhaps not quite as earthshaking as the one on "Phase One", but still pretty great. Bowie (I think it's Bowie) gets so worked up during his solo that he begins shouting something like, "...Fan...dang....Fuck those motherfuckers, man! They aren't gonna go tell you shit, man!!" Ah and then "Odwalla", I believe for the first time on record. What a timeless, beautiful theme, so forcefully stated by the paired bass saxophones, the line iterated with variations for several minutes before they strut
off-stage, stil 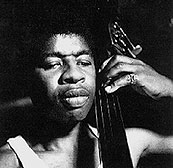 "Fanfare for the Warriors" is the final piece of my "great sextet" of AEC recordings, recorded in 1973 with the addition of Muhal Richard Abrams. You might think that messing with the quintet's chemistry could cause some problems, including muddiness, but nothing of the sort occurs. If I had to pick a nit, it might be that there's a small tinge of the smorgasbord here, a little bit of a sampling selection at the expense of a unified whole. But each element is brilliantly created, so it's a trifling matter. 99 times out of 100, something like "Illistrum", with its faux naive mysticism would likely send me rushing for the turntable to advance the stylus, but damned if they don't pull it off. The furious swing of Bowie's "Barnyard Scuffle Shuffle" (when the tenors lock into unison late in the piece, yow!), the mazelike, supersolid structure of Mitchell's "Nonaah", the ecstasy-to-calm of the title track, all wonderful pieces. I think it might be "Tnoona" that stays with me the most, though, and is also the one work with (tenuous) connections to future lower case improv. Well, except for its close. But I think (?) it's pretty unique in the AEC's discography and a powerful, haunting piece.

Six fantastic recordings that still reward. More on subsequent releases later, but for my bucks, this was their peak. I saw them perform maybe five or six times. They were wildly inconsistent and, oddly enough, the last time I saw the intact quintet (I caught a quartet version, sans Jarman, 6-7 years back at Merkin), in the mid 80s in the garden at MOMA, might have been the strongest of those.
Posted by Brian Olewnick at 1/28/2007 08:34:00 PM

great stuff, I've really enjoyed your writings on this subject, I don't have PHASE 3, must find it. My copie of BAPTIZUM as we speak is somewhere between Melbourne and Nantes in transit; being sent post-haste to me from a trumpet playing friend of mine. When I left oz I left behind with him a pretty serious free jazz improv CD collection which I left in his good hands (after ordering him to listen to all of it of course, repeatedly!! )
thanks

thanks for this post - i haven't heard the version of ohnedaruth on phase one, but i've been a longtime devotee of the performance on bap-tizum...though without a clear idea of who's playing what. your play-by-play of the earlier recording tempts me to ask if you (or anyone reading this) can parse out what joseph and roscoe are doing, respectively, throughout? particularly, who's improvising on soprano(or -nino) w/ lester at the halfway point, and who's on alto and who's on tenor later?

Hi Joseph. Definitely pick up Phase One--it should be available on the Atavistic release.

Without re-listening, I do think it's Jarman on sopranino early in the Bap-Tizum version, Can't recall if Mitchell has anything approaching a solo there or if it's mostly group play later in the piece.