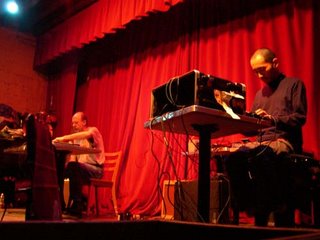 That season again. I set a personal record this year, I'm pretty sure, as I acquired 207 recordings in the calendar year 2006. Although I realize this is only about, I'm guessing, an eighth of what Pinnell takes in annually, it's a ridiculous amount of new music to listen to in such a short time, much less comment on semi-intelligently. And a lot of it was very good. This is largely a function, I imagine, of labels accurately ascertaining my general taste and sending along things likely to fit in. Good job, guys and gals, I appreciate it.

I want to make special mention of Erstwhile. Over the years, I've received a bit of flak for how highly I regard this label, some due to my having known Jon Abbey personally since slightly before its inception. Well, tough. I can't help it if he routinely produces much of the best music around. 2006 marks the sixth year in a row that my #1 slot is occupied by an Erstwhile release. Here's the recent history:

(fwiw, in 2000, I ranked Cecil Taylor's "Nailed" #1 with Tilbury's Feldman collection, "All Piano" second and Rowe/Muller/Sugimoto's "The World Turned Upside Down" third. Were I re-doing that year today, I imagine the Tilbury (a non-Erst) would be at the top, with Rowe/Muller/Sugimoto next)

Careful observers of the above listing (or anyone who can read) will notice another common element: Keith Rowe. What can I say? For my money, he's created the finest, deepest music I've heard in the last several years, with AMM up to a couple years back, on his own and with various collaborators as well, especially with Tilbury. That Jon has succeeded in producing most of Keith's best work since 2000 is all to his credit. Thanks, Keith and Jon!

I thought 2006 was going to be another shoo-in for the Rowe/Abbey team. Well, they made it but it was much closer than I would've expected mid-year, Jason Lescalleet's extraordinary album, "The Pilgrim" making a very strong, late-game run. Two things gave "between" the edge: 1) the piece "Lausanne" contains the most beautiful music I've heard since the Doris sessions (which, gun to head, would be my current choice for favorite album ever) and 2), the more general nature of the Rowe/Nakamura album is, ultimately, more to my liking than the specificity of Jason's, as beautifully and deeply stated as the latter is.

I also wanted to make special mention of Nicolas Malevitis' fine label, Absurd, out of Greece which produced a large number of wonderful discs that made it to me this year. Congrats, Nicolas! And similarly to Mark Wastell, both for his own work and for the Confront label. Well done, Mark.

So, here we go. As always, when I say 2006, I'm referring to things I acquired during that year. I'm sure some of these came out in 2005. Maybe even 2004. I don't care. I am including a separate section for things which either came out in 2006 but consisted largely or entirely of earlier material or things that I happened to pick up but are from far enough back that even I can't put them in a 2006 listing.

10 Things Containing Music from Years Past that I Loved:

Other recordings I enjoyed a bunch (thanks, everyone!)