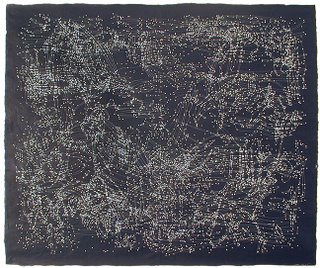 Just a couple of notes. Went gallery-hopping in Chelsea yesterday with my friend Carol. Two shows stood out: One by Theresa Chong, a sample of whose work can be seen above, though the pieces are intricate enough that small repros don't come near to doing them justice. Either black on white or white on black, it seems she (randomly?) distributes tiny squarish-shapes on paper then simply makes linear connections between them as she sees fit. My first thought was of an exceedlingly complex graphic score and, indeed, doing a little research, discovered she has had training as a cellist and a strong interest in Cage. The exhibition includes a fine, whimsical video as well. At the Danese Gallery, 535 W 24th St. through Feb. 10.

The other, coincidentally enough as it turned out, was a small exhibition of John Cage watercolors. I believe I've seen some of these in reproduction but not for a long time and I'm sure I'd never seen them in the flesh. Beautiful works. I forget the gallery, but it was on the south side of W. 24th between 10th and 11th. The one below wasn't there but it's not dissimialr to the six or seven that were. 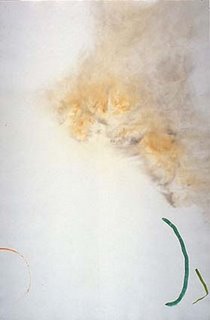 Finally, there's a good and reasonably lengthy article by Steve Smith in today's NYT on the upcoming Robert Ashley opera, "Concrete". Well done, Steve!
Posted by Brian Olewnick at 1/14/2007 10:09:00 AM