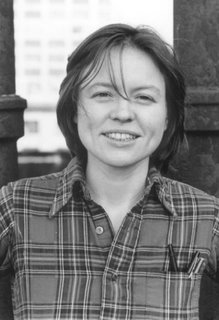 Admit it, you didn't recognize her.

I'm sure I first saw the name Laurie Anderson while browsing through Art Forum (or Art News or Art in America) in the library at Vassar in the early 70s. I'm reasonably sure that the article had to do with her piece which involved encasing her skate-clad feet in a block of ice, positioning said block on a corner somewhere on Canal St. and Ms. Anderson playing her violin until the ice melted enough that skateblades touched pavement. Though I can't now locate the exact year of that piece, so I may be off a bit.

So when "Big Science" made the big time, I wasn't entirely unfamiliar with the comely lass with the deep dimples and the spiky hair but still, what a record! This is one of those items that, if heard by a 20-something in 2007, I have to think would have drastically less effect than it did when heard by a 28-year old in 1982. The digitalization of daily life was just being infused into the general atmosphere and Anderson perfectly captured the mixture of wonder, awe, giddy excitement and a tinge of fear that percolated in the minds of alert observers back then. Today, of course, there's a certain quaintness about pieces like "O Superman" but, as is usually the case with nostalgia, if you heard it at the time, it will always retain an aura of "newness".

It distresses me greatly that I can't locate any pics of the inside sleeve of "Big Science", an extreme close-up in black and white, raking light of a wall-socket, its shocked, alien "face" an appropriate flip-side to the moronic yellow smileys beginning to make their rounds at this time. But it's indicative of one of Anderson's central themes: using commonplace objects or activities and imbuing them with extra-normal aspects. When she says, "Don't forget your mittens" you know there are other meanings being attached to the phrase even if, as encountered in pre-sleep states, you can't logically make the connections.

Although you can hear vestiges of Minimalism, Anderson's music comes a bit more out of Robert Ashley, I think and exists in a vein abutting things like Angelo Badalamenti. Personally, I also enjoy those rare occasions when she veers to the harsh side as on "Sweaters" (with Rufus Harley!) and "Example #22". But the pop hit "O Superman" holds up very well even if the notion of incorporating a phone message ain't as cool today. The delicious dread of the lines, "So hold me, Mom/In your long arms/Your petrochemical arms" is as chilling now as then.

But my favorite pieces are still the closing two tracks, "Let X=X" and "It Tango" which, as they bleed directly into each other, I've always thought of as a single work. Those of you too young to have ever taken a course or two in Basic programming (as I did around that time) might not derive the same frisson of pleasure at the first title as I do. I recall encountering that "phrase" and marvelling at the poetry of it, the idea of "letting" something equal itself. Hard to explain, but those six symbols are an amazingly concise chunk of meaning. The two songs are wonderful examples of Anderson conflating everyday vernacular with dream-logic as well as, in "It Tango", the bemusement of interpersonal relationships. Not to mention George Lewis' great, rollicking trombone-itude. Here you go:

I went to see her massive show, "United States" (from which the tracks on "Big Science" derive) at BAM in the mid 80s. The performence and subsequent 5-LP release have plenty of juicy moments though there's a bit of a stretching-thin quality as well. She began to turn more toward pop song accessibility with "Mister Heartbreak" (Laswell, Belew, etc.) and "Home of the Brave", which I also saw at the Beacon Theatre. Again, a song here and there hit home but the rewards were dwindling and I stopped following her career. iirc, in preparation for "Strange Angel", she took singing lessons. *sigh* Aside from her having been Mrs. Lou Reed for a while now, I have almost no idea what she's been doing for the last 18 or so years.

Oh yeah, one other thing. Sometime maybe around 1983-84, she had an installation at the Queens Museum of all places, in Flushing Meadow Park. A bunch of very cool objects there including a pillow with built-in speakers, a seemingly solid, wood block table with a couple of semi-circular indentations at one end in which you placed your elbows then cupped your hands over your ears, only then hearing the music embedded within resonating via your ulnae and radii, and a phone booth. You picked up the receiver and heard Anderson softly prodding, "Say something" When you did, it was recorded and played back a second or two later through the earpiece, making conversation seriously complicated.

I'm trying to figure out if I know you. It has been almost 40 years. But I remember the library at Vassar so much it is like part of my unconscious.

No I don't think so. I went from '72-'73 then was back there unofficially (studying privately with Alton Pickens) in '75.

Yeah, that library tends to stick in the memory. Amazing place.

I was around in those years. My sister graduated in '73. I had sidejobs at both Frivolous Sal's and Squire's east. And for awhile when I was in Manhattan I was married to the Dean of Faculty's daughter.

Refresh my memory about Alton Pickens.

Was he in the art department? Perhaps I spent a semester learning a little bit about charcoal sketching because one of my girl friends dared me to.

But I see from your bio profile that you are into music. The music scene at Vassar was something else also. Gene Dinwiddie gave an incredible concert in the Chapel about a year before you got there. Blanca Uribe on the Piano. Miriam Makeba. I wish I could remember it all. As the years go by, music and art memories come as flashbacks at odd moments from unexpected stimuli. Maynard Fergusen coming by because his daughter Kim was a Poughkeepsie girl. Leonard Bernstein's niece Alison getting artists to show up for impromptus. Firefall hanging out at Matthew's Mug. The Guarneri in the music building consert hall. Having my own Steinway in one of those little cells the semester I studied piano under Todd ... after Stephen Lubin spent a semester as an artist in residence. The Powerhouse Theatre. Heady days those.

Yep, Pickens taught in the art studio. He'd been there for a while when I arrive and I think taught through the early 80s. He dies in '91. Great teacher.

I caught the Incredible String Band at Vassar in '71 or '72 when I was still in high school (in Poughkeepsie). While at Vassar, I remember seeing Papa John Creach, Paul Winter, Mahavishnu John McLaughlin, many classical things (Ursula Oppens was teaching there then), others I'm sure I'm forgetting.

Blanca Uribe! Yes, I remember the name and I'm sure I heard her, though I can't think of the context.